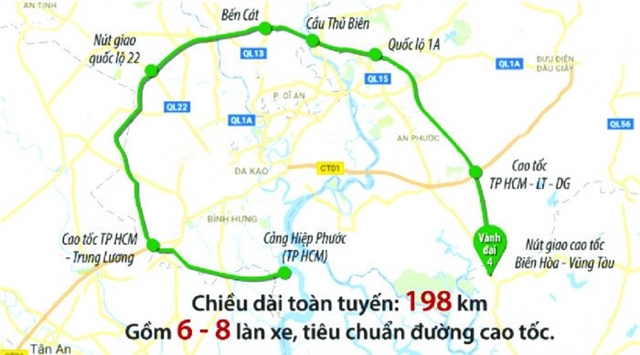 A map shows the planned Ring Road No 4 through HCM City and the provinces of Bình Dương, Đồng Nai, Long An, and Bà Rịa-Vũng Tàu. — Photo www.baogiaothong.vn

HCM CITY — Construction of the first phase of Ring Road No 4 through five southern localities, including HCM City, will start next year and be completed in 2028, according to the city Department of Transport.

The road, nearly 200km long, is expected to boost linkages between the city, the provinces of Bình Dương, Đồng Nai, Long An, and Bà Rịa-Vũng Tàu, and generally the Southern Key Economic Region.

It will have four lanes in the first phase, to be widened to six or eight in the second.

Approved more than 10 years ago it is estimated to cost around VNĐ100 trillion (US$4.4 billion).

In September last year the Government instructed the five localities to carry out the work on the road.

It enjoys consistent growth that is always higher than the national average.

Many foreign enterprises opt to invest in the region, but its transport connectivity is still not good.

A number of transport projects are being undertaken in the region to change that, including Long Thành International Airport in Đồng Nai and the Biên Hòa – Vũng Tàu Expressway between Đồng Nai and Bà Rịa-Vũng Tàu provinces. — VNS