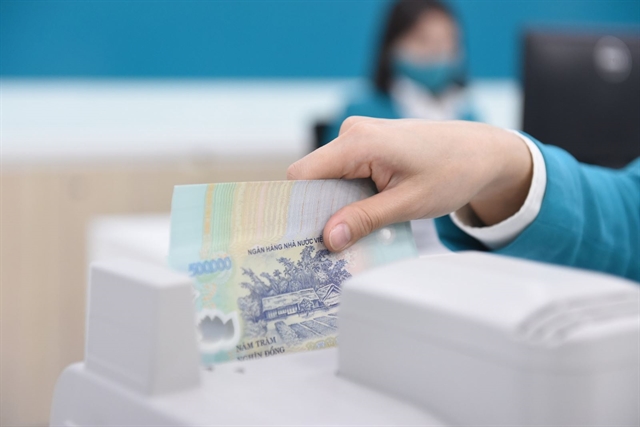 A bank employee handles cash. The scale of the corporate bond market is currently 15.9 per cent of GDP. — VNA/VnExpress News Photo

HÀ NỘI — Regulations introduced in the draft Decree 153 on bond issuance may impede the growth of businesses, reducing their competitiveness compared to foreign rivals.

This issue was discussed by experts at a meeting named: “Corporate bond market under the impact of draft amendments to Decree 153/2020/NĐ-CP”.

“Under the Investment Law and the Enterprise Law, capital contribution and lending is a right of enterprises. This is also common practice in the international market. Enterprises are entitled to contribute capital for investment, such a draft regulation is a limitation of the enterprise’s rights,” said Đỗ Ngọc Quỳnh, General Secretary of the Việt Nam Bond Market Association (VBMA) said.

Regarding the issue of credit rating results for enterprises, Quỳnh said it is necessary to consider applying relevant regulations on compulsory credit rating to the private placement of bonds.

“Since 1992, when the first credit rating agency of Malaysia was established, the country forced all bond issuers to have mandatory credit rating results. They said the move aimed to build a culture of information transparency among the business community and investors,” Quỳnh said.

Issuing bonds to the public is also facing obstacles, he said.

“The issuer must apply for approval from the State Securities Commission, while a private placement of bond does not require this. The process of application and response from the State Securities Commission lasts 30 days, impeding businesses from controlling the time to issue bonds, which leads to a breakdown of plans. Businesses often prefer private placement,” Quỳnh said.

“The scale of the corporate bond market is currently at 15.9 per cent of GDP, which is a very large number, beyond the imagination of the regulator. However, the fast-growing market certainly has potential risks. Credit growth needs to be managed more cautiously, especially in sensitive areas such as real estate,” said Nguyễn Hoàng Dương, deputy director of the Ministry of Finance’s Department of Banking and Financial Institutions.

“In the primary market, the number of corporate bonds bought by individual investors still account for a very low rate of about 5.5 per cent of the total bonds issued in the market. However, in the secondary market, it accounts for nearly 30 per cent, even higher in the real estate sector, at nearly 40 per cent,” said Dương.

“However, individual investors are still themselves, unable to adequately assess or measure the risks of the issuers as well as the bonds,” he said.

In addition, the draft also adds regulations on credit ratings for some types of issued bonds to increase publicity and transparency, contribute to improving the quality of issued bonds and meet international practices that limit risks to investors, he said. — VnExpress News