HÀ NỘI — The Writers Association Publishing House and HC 100 project will release a new book to celebrate the 100th anniversary of the birth of poet Hoàng Cầm (1922-2010).

The book launch will be held at the French Institute in Hà Nội and broadcast live on the Facebook pages of the institute on February 12. 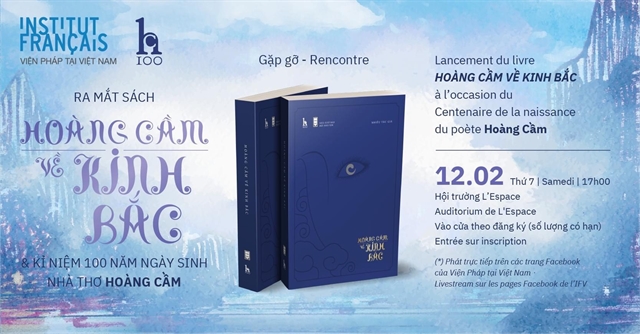 Poster of the book launch event. — Photo courtesy of the organiser

Hoàng Cầm was born in 1922 into an intellectual family in Thuận Thành District in the northern province of Bắc Giang.

He began writing poems at the age of eight and his poems were first published when he was 14. He graduated from senior high school in 1940 and began his career as a writer and translator.

He was a founding member of the Việt Nam Writers Association in 1957. In 2007, he was awarded the State Prize for Literature and Arts, the highest award in Việt Nam.

His famous works include poems Bên Kia Sông Đuống (The Other Side of Đuống River) and Lá Diêu Bông (Love Leaves), and the dramatic play Kiều Loan (Ms Kiều Loan), which highlight themes about the country, women and love.