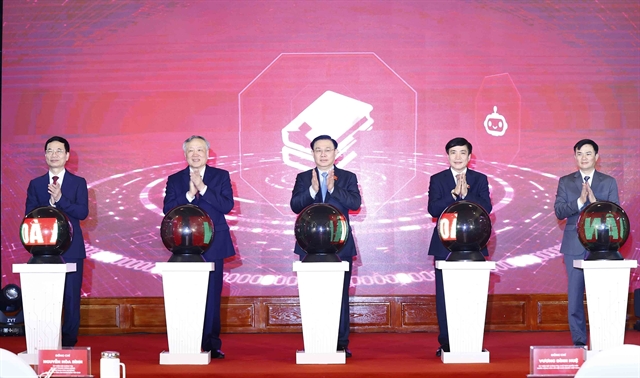 The applications are a database-library central system, monitoring and operation centre, virtual assistant software for the judges, and the people’s online court.

Addressing the event, the NA Chairman Huệ congratulated the Supreme People’s Court on their technology achievements and said that the launch marked great progress in the application of information technology in supporting the court’s operation.

The People’s Courts of all levels have also agreed that digital transformation is the key solution to the shortcomings in their operations, as well as providing support to the judges to fulfil their assigned missions.

Emphasising that these applications are the foundation for digital courts and smart courts in Việt Nam, the NA Chairman also added that step by step, this infrastructure is responding to the expectation of the people and generations of court officials.

This move is also a prompt and effective solution to proactively and safely adapt to the complicated COVID-19 pandemic, which has been affecting legal proceedings in court.

NA Chairman Huệ also acknowledged the achievements in all levels of the People’s Court in recent years, including the proactive proposal of numerous policies that act as a foundation to enhance the application of information technology, such as the online public services, the e-portal for publishing court rulings and decisions, and the management software system.

He also affirmed the need to promote juridical reform in the People’s Courts and to actively advise the Party and the Government on the matter, focusing on the strategic project of building and completing the rule-of-law socialist State of Việt Nam to 2030 with a vision to 2045, and the project on building the digital court in Việt Nam in response to the requirements of judicial reform.

The application of information technology in judicial operations must put people and businesses at the core, the goal, and the measure of success, with invigorating officials’ thinking being the decisive factor in the digital transformation strategy.

Chief Justice of the Supreme People’s Court Nguyễn Hòa Bình also said that in addition to accelerating the application of technology and digital transformation, enhancing the court personnel capacity is of utmost importance to judicial reform and building a modern, professional judiciary for the country.