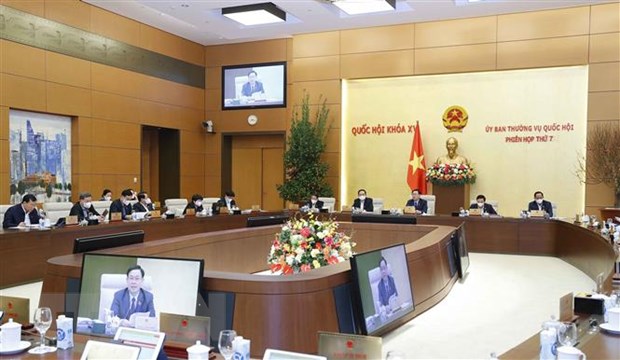 HÀ NỘI — The National Assembly (NA) Standing Committee on Wednesday discussed the summary report of the first extraordinary session of the 15th NA, applauding its organisation and effects.

Speaking on the second day of the 7th session of the 15th NA Standing Committee, Secretary-General and NA Chairman Bùi Văn Cường said that the extraordinary session, which was held online earlier this month, allowed the NA to make important decisions on the national socio-economic recovery and COVID-19 pandemic prevention and control.

After four and a half days working with the spirit of urgency, science, democracy and high responsibility, the first extraordinary session of the 15th NA completed the entire program set out with great success, Cường said.

“At the session, the NA deputies promoted their sense of responsibility with constructive opinions. Agencies of the National Assembly, the Government and relevant agencies worked hard day and night to complete drafts and submit to the NA agenda,” Cường said.

During the first extraordinary session, the NA considered and approved one law and passed four resolutions, Cường said.

Head of the NA’s Science, Technology and Environment Committee Lê Quang Huy said the success of the first extraordinary session was thanks to close coordination between the agencies of the Government and the National Assembly in preparing, drafting and verifying draft law and resolutions.

“The session showed determination in renewing the activities of the National Assembly and quickly solving urgent problems. The resolution on fiscal and monetary policies to support socio-economic recovery and development programs passed by the National Assembly will help solve difficulties for businesses, particularly during unpredictable developments of the COVID-19 pandemic.

However, Huy said that to make the extraordinary meeting become more effective, the agencies responsible for drafting and verifying the laws need to work more carefully, reporting possible impacts of the laws for the NA to consider and give opinions properly.

“Now, it is important to ensure that the NA resolutions could be carried out quickly, with close supervision from agencies of the Government and the National Assembly,” he said.

NA Vice Chairman Trần Thanh Mẫn said that the determination to organise an extraordinary session of the National Assembly was of interest to voters and people nationwide. The contents of the meeting were all practical issues, affecting wide swathes of society.

To ensure the safety of the meeting, the COVID-19 prevention and control measures were coordinated by the health and security forces. Information and propaganda work was also focused effectively, Mẫn said.

The Ethnic Council and NA’s committees all made great efforts and worked closely to carry out the meeting in a sense of responsibility and work most seriously, Mẫn said.

Also on Wednesday morning, the NA studied and gave opinions about a plan on foreign capital investment with unallocated and adjusted capital. They also considered a proposed medium-term public investment plan for project portfolios of ministries, central and local agencies during the period 2021-2025.

The Government has reviewed and submitted to the NA Committee a list of 340 projects of ministries, central agencies and localities that have completed investment procedures regulated in Article 52 of the Law on Public Investment.

The NA Standing Committee agreed with the Government’s proposals, asking the Government to use their experience to focus on directing investment preparation work to prevent projects from delaying – a problem in recent years.

For the list of projects and the specific allocation of capital for each project of the ministries, branches and localities that have not yet complied with regulations, the remaining capital will not be allocated under the public investment plan for the period 2021-2025.

The NA Standing Committee also asked the Government to identify specific subjects, criteria and funding for national target programmes so that the programmes could receive funding in the first quarter of this year. — VnExpress News