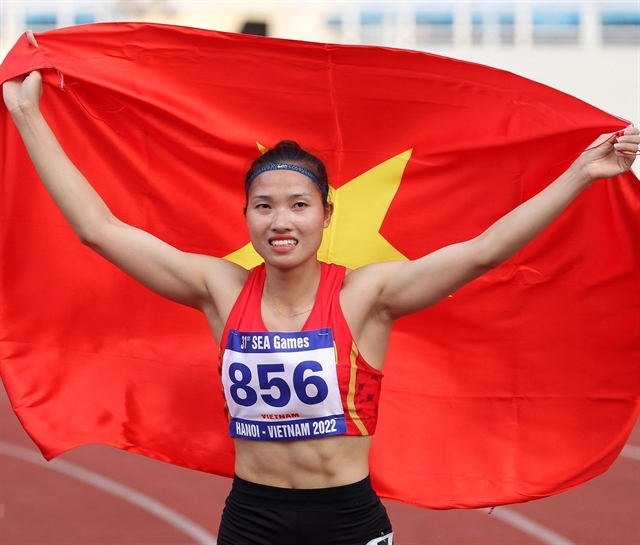 Attending the region’s biggest sports event for the first time, Na caused an upset when she won the gold medal in the women’s heptathlon with 5,415 points, breaking Vietnamese Nguyễn Thị Thu Cúc’s 17-year national record of 5,350 points in the process.

This was also the first time since 2005 that Vietnamese athletics won gold in this category in the regional Games. Na’s achievement is even more special as just two years ago, she intended to retire because of a necrosis injury.

“I think playing one sport is boring, so playing seven sports will be more interesting. It is the first time I have attended the SEA Games and to win the gold medal at home made me extremely happy,” Na said.

Na is 25 years old. She is a Mường ethnic from Hòa Bình Province and is an athlete in the Military team. A few months ago, her achievement at the national championship was 5,096 points and she herself was surprised that she was able to improve her achievement by more than 300 points to win the SEA Games gold medal at home.

The heptathlon is the toughest event to win a medal in the track and field. At this year’s Games, only six athletes from Việt Nam, the Philippines, Malaysia and Thailand participated. SEA Games 30 bronze medalist Sunisa Khotseemueang of Thailand dropped out after the first three sports.

“When I competed in the first sports, I didn’t think I could win. Really, right now I don’t still believe I took the gold medal. The score of 5,415 is also my best achievement so far,” Na said.

“At first, I was a bit nervous because I attended the SEA Games for the first time. But the home turf advantage and support of the audience gave me a great motivation to achieve this result. I would like to thank everyone,” Na added.

Na’s victory was even more meaningful as she overcame the SEA Games 30 gold medalist Sarah Dequinan of the Philippines and SEA Games 30 silver medalist Norliyana Kamaruddin of Malaysia.

The coach who inspired Na is a familiar face of military and Vietnamese sports, Lieutenant Colonel Vũ Văn Huyện. Huyện is famous in the region, having won gold in the men’s decathlon in four consecutive SEA Games.

Huyện himself was also surprised by Na’s achievement: “I thought Na would win about 5,200 points as in the national championship in 2021, her score was only 5,096 points. However, she performed well in all events and won a spectacular gold medal. The desire to dedicate herself to the country’s sports at her first Games has given Na a great source of strength”.

“I was more nervous and trembling when I watched Na compete than when I competed in the past. However, she was good, really good. I saw that she has supernatural power. She performed smoothly in any categories, without errors. She suffered an injury to her thigh but she never gave up. Her fitness was only about 70 per cent but her efforts were great,” Huyện added.

According to Na, she met her injury after completing the 2020 tournament and had to have surgery.

“In 2020, I had a period when I wanted to quit training because this sport requires a lot of physical strength. I was very discouraged and wanted to give up, but my will did not allow it. I wanted to play at the SEA Games held at home, compete for the first time and bring glory to the country,” Na said.

Witnessing her daughter win a gold medal at the Mỹ Đình National Stadium, Nguyễn Thị Thủy, Na’s mother, said: “That’s what I expected. Before, I just thought it was a dream, but the Games 31 has turned the dream come true. When I hold my daughter in my arms, I could only say thank you.”

Thủy said Na didn’t tell her about her difficult times in training, only promising to try her best to win.

From an unknown athlete in Vietnamese athletics, Na has gradually asserted herself, overcoming injuries and difficulties during training and competition to reach the pinnacle of regional success.

This is the “sweet fruit” for the Mường girl after more than ten years of training in this fierce sport. VNS