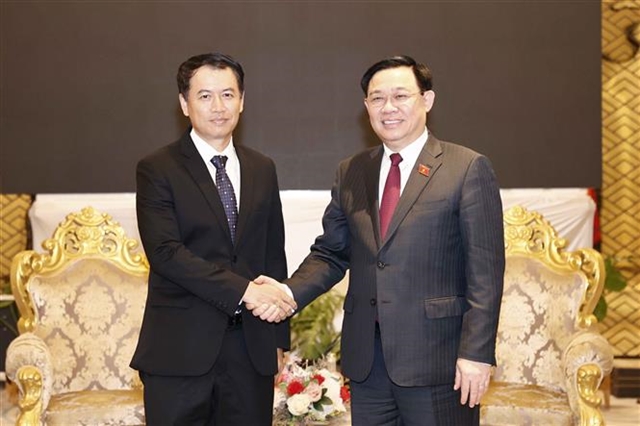 The NA Chairman expressed his pleasure to meet Malaythong Kommasith, affirming his interest in the state audit industry as one who has extensive experience in the field.

Malaythong Kommasith also expressed his honour to meet National Assembly Chairman Huệ, mentioning his appreciation for many important initiatives of Huệ while still holding the position of State Auditor General of Việt Nam, such as the rotating mechanism to organise meetings of audit agencies of CLV countries; putting many cooperation contents between the two State Auditing agencies of Việt Nam – Laos into the content of joint cooperation between the two Governments of Việt Nam – Laos; creating favourable conditions for many delegations of the State Audit of Việt Nam to come to Laos to share valuable experiences, contributing to the development of the relationship between the two audit agencies.

Kommasith announced that in July 2021, the President of the State Audit of Laos held an online meeting with the State Auditor General of Việt Nam to review and re-evaluate the cooperation between the two agencies, through which the two sides agreed to continue promoting cooperation in training of auditors, cooperation in improving audit and post-audit quality in the coming time.

The two sides will also work to develop a cooperation agreement, promoting the exchange of delegations, training methods and experience sharing on modernising audit work. On the occasion of the Year of Solidarity and Friendship 2022 to celebrate 60 years of establishing diplomatic relations and 45 years of signing the Treaty of Friendship and Cooperation between the two countries, the two state audit offices also expected to organise many activities.

National Assembly Chairman Vương Đình Huệ suggested that in the future, the two state audit agencies of Việt Nam and Laos should further enhance cooperation contents and comprehensive forms in order to continue to improve organisational capacity and professional expertise at each agency, to become model agencies at INTOSAI, ASOSAI, ASEANSAI.