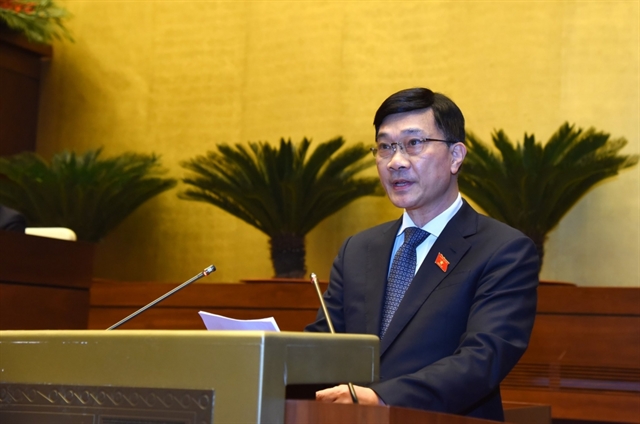 Chairman of the National Assembly’s Economic Committee speaks at the NA’s extraordinary meeting in Hà Nội on Tuesday on the investment plan for the eastern section of the North-South Expressway. Photo chinhphu.vn

HÀ NỘI The National Assembly on Tuesday ratified a resolution on building the eastern section of the North-South Expressway during its extraordinary meeting in Hà Nội.

Accordingly, 729 kilometres will be built on the eastern wing of the expressway from now until 2025. It will be divided into 12 sections, running through the central provinces of Hà Tĩnh, Quảng Trị, Quảng Ngãi, the south-central city of Nha Trang, the southern city of Cần Thơ, and the southernmost province of Cà Mau.

The total investment for the project is VNĐ146.9 trillion (US$6.49 billion), which will be taken from the State budget. The fee collection rights will be franchised to recover the investment after the section is completed.

Of this, about VNĐ119.7 trillion will be spent on the project during the 2021-25 period, which will be taken from two sources. One is the State’s budget allocation for mid-term public investments for the period. The other is the State’s budget for infrastructure development, which is regulated in the resolution on fiscal and monetary policies in support of the socio-economic recovery and development programme.

Another VNĐ27.3 trillion will be disbursed to the project in the 2025-30 period.

A total of 5,481ha of land is needed for the project, including 1,532ha of agricultural land, 110ha of protection forest, and 1,431ha of production forest.

The resolution specifies that preparation should be done in 2021, the section should be completed in 2025 and open for public use in 2026.

Apart from this section, a further 27 kilometres of the North-South Expressway will be built in a separate project, together with the Cần Thơ 2 Bridge, after 2025.

The NA Standing Committee asked the Government to examine all factors that affect the project and come up with detailed design solutions, which will serve as a foundation for setting bid packages to select contractors.

It also asked for close collaboration from the inspection and auditing agencies to manage the budget and prevent misuse.

Some deputies said it is inappropriate to take VNĐ72 trillion from the 2021-25 socio-economic recovery and development programme for the project in the 2024-25 period, since it does not correlate with the programme’s goals.

To solve this issue, chairman of the NA’s Economic Vũ Hồng Thành proposed the Government divide the disbursement into different stages. Items that are approved for investment in the 2021-25 period can be prioritised to receive money in 2022 and 2023 from the programme.

Vice versa, the money set out for those items in the mid-term investment plan for the period can be saved for other important infrastructure projects in 2024 and 2025, he said. VnExpress News