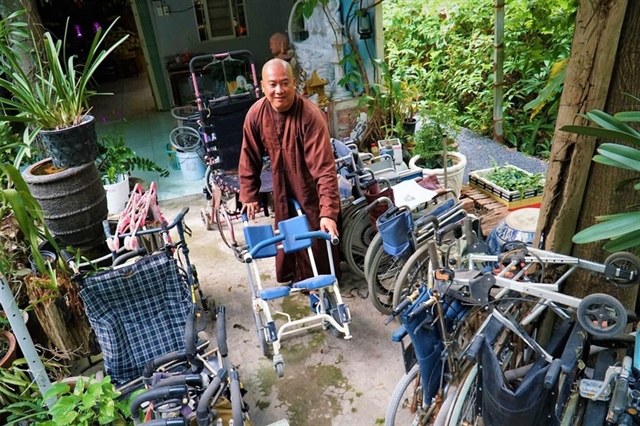 Monk Đức Minh stands in the middle of the old wheelchairs he has collected and repaired for people with disability. —Photo plo.vn

HÀ NỘI — At 2pm every day, Monk Đức Minh opens his toolkit, which includes screwdrivers, nails and spare tires, to start his job.

In a small yard of An Viên Ashram in a deep zigzagging alley in HCM City, Monk Minh repairs and upgrades old wheelchairs. These wheelchairs will later be sent to those who are in need.

Monk Minh has been doing this job for the past seven years. He has mastered the design of all types of wheelchairs and even adjusted some designs to make them fit and comfortable for each person with a disability, helping them find them easy to use.

An Viên Ashram turns into a ‘factory’ for thousands of special wheelchairs every afternoon as Monk Minh and other Buddhists clean and fix the old wheelchairs.

Monk Minh said each wheelchair would be repaired and made suitable for the owner, as each person with a disability had a different body defect.

“Some have disabilities in their hands, some in their legs, some suffer paralysis of their whole body, so each person needs a different vehicle,” he told the online newspaper PLO.

Monk Minh began collecting and fixing wheelchairs for disabled people after visiting hospitals with a charity group in 2015.

“I witnessed many people with miserable lives. They used to be healthy, but after an accident, they could no longer work. They were poor and couldn’t afford a wheelchair to move around,” he said.

Minh tried to buy new wheelchairs to send to those in need, but he couldn’t do it due to the vehicle’s high cost of between VNĐ1.5-3 million (US$65.3-130) each, so he decided to buy old wheelchairs with the hope of fixing them. 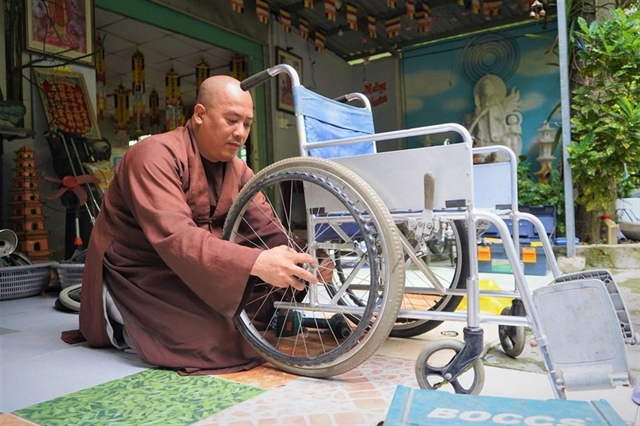 Minh learns about the structure of the wheelchairs on his own. — Photo plo.vn

Minh began to learn about the structure of the wheelchair, dissembling worn-out parts and replacing them with new ones, adding new parts if needed.

“Some vehicles are so degraded that all parts are rust apart from an iron frame. These vehicles need a lot of components. The vehicle is somehow like the legs of a disabled person, so I want to make it very stable so that they can feel secure to sit on and move around,” he said.

For him, the wheelchair is like the legs of disabled people, helping them step out of their shells, meet new people and integrate into society.

“People with disabilities also dream of standing up and walking around like everyone else, rather than staying in one place,” he said.

Monk Minh said he always asked about the patients’ health conditions, so he would make the best wheelchair that fits them.

For example, a man with polyarthritis and paralysed legs that can only walk on his knees will need a short wheelchair to move around easily. A paralysed person will need a lying vehicle with light thrust because they can barely move the wheelchair on their own.

He said it takes him five to seven days to complete a wheelchair. Once completed, the vehicle is carefully packaged and sent to the recipient.

Monk Minh said that every person in a wheelchair has their own story. Some lost their job, marriage, and ability to work after an accident.

Some can do nothing but lie down all day long. Minh believes wheelchairs can help them feel better in life as they can move around on their own without waiting for help from others. — – VnExpress News