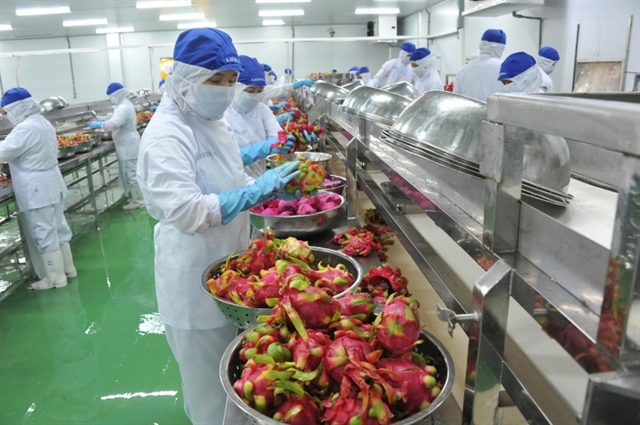 HÀ NỘI — The Ministry of Industry and Trade (MoIT) will promote a scheme for official exports of agricultural products via an e-commerce channel, according to the ministry’s official.

At the National Assembly meeting, Minister of Industry and Trade Nguyễn Hồng Diên said that MoIT has completed the project and was collecting opinions from several ministries and sectors on this project. So far, 18 out of 63 localities nationwide have sent their views on the scheme.

The ministry will complete the scheme based on the opinions of provinces and cities. It expects to submit the scheme to the Government for approval this month.

Therefore, the authorities need to encourage producers, farmers, and businesses to enhance official exports while also focusing on solving difficulties in the production and export of farm produce, Hải said.

In addition, the MoIT will continue to take advantage of 17 signed free trade agreements (FTAs) in strengthening negotiations on exporting more agricultural products, Diên said. Besides that, the nation is also developing e-commerce channels to boost the export of farm produce.

Diên said the ministry had coordinated with the Ministry of Agriculture and Rural Development in carrying out an efficient transition from traditional agriculture to large-scale agriculture. However, the sector still faced small and fragmented production, and the quality had not met the market requirements.

To boost the consumption of agricultural products, the MoIT has also cooperated with other ministries and sectors to facilitate procedures for international trade activities and reduce unnecessary costs.

Diên affirmed that Việt Nam’s agricultural products have entered very fastidious markets such as the US, EU, Japan, and other developed countries because the products meet their standards.

He said that the ministry had done a very good job providing market information, production orientation and consulting for producers and businesses.

According to the Ministry of Agriculture and Rural Development, the export value of agro-forestry-aquatic products in the first five months of 2022 was estimated at US$23.2 billion, up 16.8 per cent on the year.

In this period, the export value of main agricultural products surpassed $9.4 billion, up 10.4 per cent; that of main forestry products reached nearly $7.7 billion, up 7.6 per cent; and aquatic products almost $4.8 billion, up 46.3 per cent.