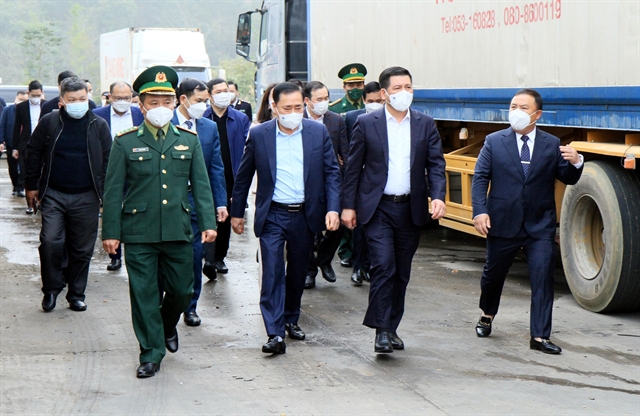 HÀ NỘI — Minister of Industry and Trade Nguyễn Hồng Diên visited the northern provinces Lạng Sơn and Quảng Ninh on Monday to assess the situation at border gates and discuss ways to clear the trade bottleneck.

Diên acknowledged that trade and customs clearance had begun to improve, but a high risk still remains given the development of the pandemic.

The minister urged local authorities to step up COVID-19 preventive measures at border gates, particularly disinfecting vehicles and goods, and quickly establishing “green zones” in accordance with Ministry of Health’s guidance to ensure the full resumption of customs activities.

He also called for close cooperation between local authorities and Chinese counterparts in easing trade bottleneck, thereby keeping trade flows uninterrupted during and after Tết.

All public forces including border guards and traffic police are asked to take measures to facilitate the movement of goods.

Notably, customs officers are called on to work overtime to move at a faster pace.

Firms and farmers should focus more on market planning and bring their production in line with market demand.

Additionally, it is crucial to diversify export markets and expand market reach domestically to become less commercially dependent on China.

Local authorities should continue to adopt policies that were specified in Government directives, including Notice 350/TB-VPCP and Notice 08/TB-VPCP to put an end to the issue and avert any future bottleneck, the minister added.

By January 24, there were still 383 vehicles stuck at border gates in Lạng Sơn Province, of which 151 are fruit trucks, down from 890 compared to January 17. Meanwhile, the backlog in Quảng Ninh was 992 vehicles.