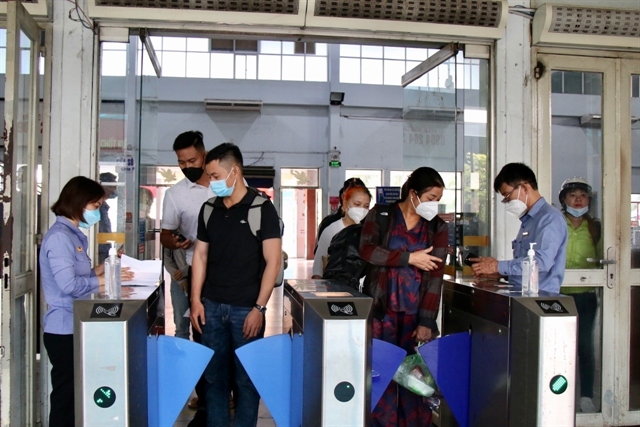 HCM CITY — It has been two years since she visited her hometown in the central province of Nghệ An but desperately wants to do so for the Lunar New Year holidays next week, Lương Thị Kim, a migrant worker at a factory in Bình Dương Province, said.

She has left her two young daughters in her parents’ care in her hometown, and so it has been two years since she saw them too.

She said: “I miss them so much. I have decided to go back.”

But the quarantine regulations in her hometown threaten to be a major hassle.

“Those who have got two vaccine doses, test negative and come from low-risk areas need to undergo home quarantine for seven days.”

For people coming from high-risk areas, it is 14 days.

But the quarantine requirements extend to every member of the household, meaning no one can leave home during the period.

“[So] I have no choice but to ask my company for a week’s leave in advance so that I have enough time to complete the quarantine before Tết,” Kim said.

She too left a week early for the festival.

“Most leave applications were due to quarantine regulations in people’s hometowns.”

To ensure production goes on, the company had arranged for other workers to work overtime if necessary, she said.

Depending on local regulations, they had taken seven to 14 days off, some even opting for unpaid leave, he said.

The problem was the inconsistency in quarantine regulations that had left many workers confused, he said.

Many provinces in the central and northern regions even encouraged people to stay where they are and not to travel back for the holiday, fearing a possible massive outbreak, he said.

“Most workers have been administered two or three vaccine doses, and so provinces should be flexible with their pandemic prevention efforts.

“The key is to comply with 5K message when returning to one’s hometown and raising awareness of prevention.”

Nguyễn Minh Tiến, chairman of Bình Dương Province’s General Shoes Co., Ltd. trade union, said due to concerns about quarantine regulations, many workers, especially those from the central and northern regions, applied for leave from January 20.

But with many urgent orders to be fulfilled, it had become very challenging for many businesses in HCM City, he said.

“Cities and provinces should conduct necessary tests, quarantine scientifically, and avoid regulations that cause difficulties for people.”

He instructed them to speed up vaccination, and pay close attention to people with high risk of contracting the coronavirus.

People travel home in the millions for Lunar New Year, which this year falls on February 1.

Experts have warned travel during the holidays could lead to a surge in cases. — VnExpress News