Members, supporters of terrorist organisation sentenced to 3-13 years for attempts to overthrow Gov’t 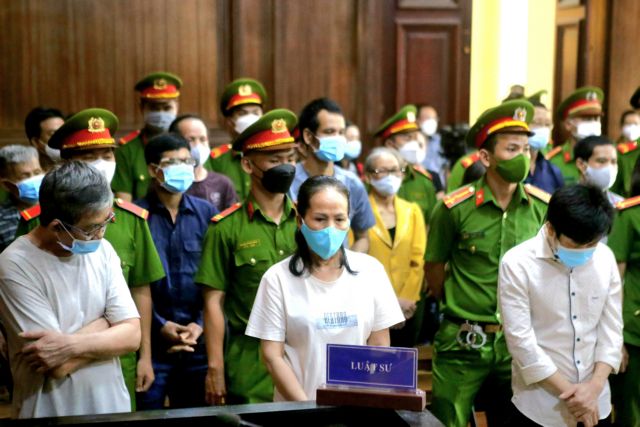 HÀ NỘI — The People’s Court of HCM City on Monday sentenced 12 defendants to imprisonments of between 3-13 years on the charge of conducting acts aiming at overthrowing the people’s administration.

The defendants are members and supporters of the so-called “Chính phủ Quốc gia Việt Nam lâm thời” (Provisional National Government of Việt Nam), which is a terrorist organisation founded and led by a man known as Đào Minh Quân from abroad. The organisation has conducted many propaganda activities advocating armed riots against the Socialist Republic of Việt Nam.

Under the instruction of many key members of this organisation, the defendants have actively enticed others to join the terrorist organisation and a “referendum” to elect Quân as “the President of the third Republic of Việt Nam”.

In HCM City, defendant Trần Thị Ngọc Xuân joined the organisation and regularly used the Facebook social network to livestream contents calling on others to participate in organising and conducting the “referendum”. From March-June 2018, Xuân lured six people, including her husband, two children and three acquaintances to join the organisation. Also during this time, she also received many documents from the members of the organisation via Facebook.

On February 19, 2019, while visiting poor households in Tam Bình Ward, Thủ Đức City, Xuân brought along five sets of printed documents and handed over the documents to three households. During the time participating in the organisation, Xuân was given a mobile phone, US$300, CA$400 ($316.4) and VNĐ3 million ($130.9).

Like Xuân, defendant Nguyễn Thanh Xoan was lured by Lã Ngọc Duyên to register to join the organisation. In addition to spreading the organisation’s propaganda, Xoan also enticed and guided four others to vote in the “referendum”.

In Đồng Nai Province, Lương Thị Thu Hiền contacted many acquaintances, saying that she was participating in a foreign organisation that was engaged in charity activities, giving away land and houses for the poor, and asked for the acquaintances’ information to register for the gifts. Many provided personal information to Hiền, but in fact Hiền used them to register for the “referendum” for Quân.

Also in Đồng Nai, defendant Trần Văn Long used personal information of more than 20 people to register for the “referendum”.

Other defendants committed similar acts in An Giang, Đắk Lắk, Đắk Nông, Lâm Đồng, Phú Yên and Kon Tum. In addition, the defendants in the case also made yellow flags with three red stripes of different sizes. They printed and distributed documents such as “Provisional Constitution”, “Constitution of the Third Republic of Việt Nam”, “Biography of Prime Minister Đào Minh Quân” in order to propagandise the organisation and the referendum to others.

The jury decided to sentence Xuân to 13-year imprisonment, while Xoan and Hiền got 12 years and 11 years in jail, respectively.

The other defendants were sentenced to imprisonments of between 3-10 years.

In addition, the defendants will be placed under home probation of 2-3 years after their jail terms end. — VnExpress News

Previous Cooperation through Party channel orients Việt Nam-China ties: Party officials
Next Third session of the 15th National Assembly to open on May 23