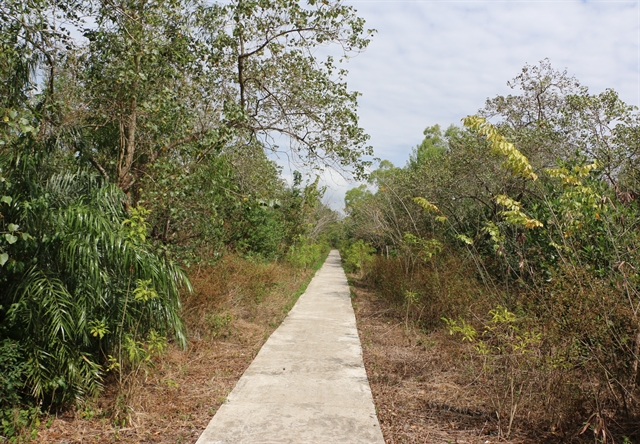 With a total area of nearly 40,000sq.km, the delta, which comprises 12 provinces and Cần Thơ City, has about 347,500ha of different types of forests, including mangrove forests, cajuput forests, national parks, nature reserves and bird sanctuaries.

Many forest areas in the delta are said to be at high risk of forest fires because of the weather and illegal human activities including lighting fires inside forests.

In An Giang, the mountainous districts of Tri Tôn, Tịnh Biên and Thoại Sơn have 7,400ha of forests, accounting for 44 per cent of the province’s total forest area, deemed at high risk of catching fire, according to the provincial Department of Agriculture and Rural Development.

The province has formed 17 forest protection and development groups in Tri Tôn and Tịnh Biên districts and mobilised 2,500 people from the military, police and other forces who stand ready to fight forest fires in mountainous areas.

It has also mobilised trucks, boats, fire extinguishers and other equipment.

Local authorities have announced that they will strictly penalise people who violate forest protection regulations and trigger fires.

“If there are large forest fires, the province’s forest rangers in co-operation with the commune People’s Committee and police will investigate the cause and strictly penalise violators,” Hòa said.

In Bạc Liêu Province, prolonged hot weather has elevated fire risk to the fifth level, the highest, at the Bạc Liêu Bird Sanctuary.

The Bạc Liêu Management Board of Protective Forests and Special Use Forests has arranged teams to monitor the sanctuary round the clock and prevent people from entering it illegally.

In Kiên Giang Province, many cajuput forests in U Minh Thượng, Hòn Đất, Kiên Lương and Giang Thành districts and Phú Quốc City are at the third, fourth and fifth levels of forest fire risks.

In the first two months of the year, Phú Quốc has suffered 13 forest fires damaging about 6ha of grass, bush and replanted trees.

Lê Quốc Anh, deputy chairman of the Kiên Giang People’s Committee, has instructed forest owners and localities to strengthen preventive measures and stand ready to mitigate impacts of any forest fire that might break out.

The province’s relevant agencies have been told to step up inspections and strictly penalise people who violate forest protection regulations.

Long An Province has more than 22,000ha of forests, mostly cajuput trees, which can easily catch fire in the dry season as they contain oil, according to the province’s Forest Protection Sub-department.

Forest growing companies and farms in the province have been equipped with additional facilities to prevent forest fires.