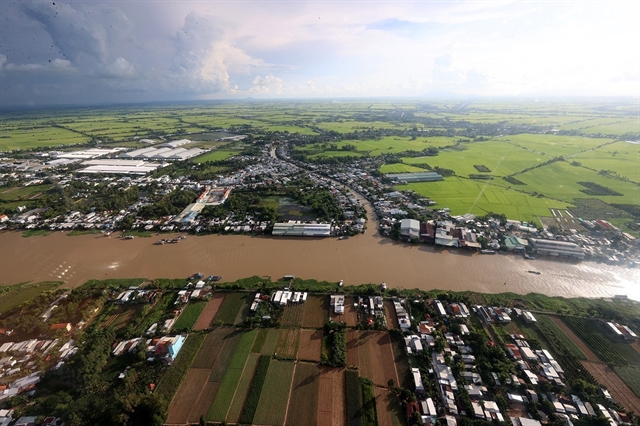 The Government leader made the remarks as he chaired a conference held Tuesday on the promulgation of the newly launched Mekong Delta Regional Master Plan in the southern city of Cần Thơ, held by the Ministry of Planning and Investment with the theme “Mekong Delta: New thinking – New vision – New opportunities – New values”.

The region with 2.5 million of fertile land enriched by the Mekong River makes it the biggest agricultural production centre in Việt Nam – contributing 50 per cent of rice output, 65 per cent of aquaculture production and 70 per cent of fruits – fulfilling the mission of ensuring food security for the country.

The region also has strengths in renewable energy, year-round tourism, and other services.

However, there are limitations and challenges that “deter it from unleashing the full potential,” the Government leader said.

Human resource is a hindrance, with the rate of trained labour at 15 per cent lower than the national rate of 64.5 per cent (24.5 per cent with certifications, and qualifications). The scale of the regional economy is also small, accounting for only 12.8 per cent of the country, with average income per capita at 67 per cent of the national average (VNĐ53.98 million compared to 80.21 million, respectively), and an urbanization rate of 27.2 per cent, which is also lower than the country’s rate of 40.5 per cent.

Infrastructure in the region remains insufficient and unable to meet the growing demands of transporting the locally-produced goods to other regions in Việt Nam, or other countries, as well as a lack of proper education and medical facilities in various localities – especially the remote, border and island areas.

The region also suffers from inconsistent, ineffective, and low levels of administration reforms, digital transformation, and business environment improvements, according to PM. Its FDI attraction is fourth out of six regions in the country.

PM Chính has laid out 10 core tasks and missions for Mekong Delta in the time ahead.

First, the region will need to strongly carry out the COVID-19 vaccination campaign, especially for children aged 5-11 and booster shots for adults, to avoid serious outbreaks and foster socio-economic recovery.

Second, the region must focus on plannings for infrastructure and investing comprehensively in education and training, including the building of national-level universities and vocation training centres to enhance the skills of workers.

Third, the Mekong Delta localities must carry out the regional master plan and consider it a central mission.

Fourth, there will be major efforts to upgrade and diversify supply chains, and resolve transport and logistics bottlenecks in the region, with new expressways situated away from current residential areas to be built as fast and cost-effective as possible. Localities should also pay attention to land clearance and compensation for households affected, to ensure the progress of the projects.

Sixth, the Mekong Delta will need to make more efforts in improving its investment and business environment, administrative reforms, digital governance, and competitiveness, to attract more investment and projects from both inside and outside the country.

Seventh, the Mekong Delta needs to take care of social welfare issues, leave no one behind, and not sacrifice social progress and justice in the pursuit of economic development.

Ninth, Party organisations in the region must be consolidated and corruption-free, and work towards greater unity, integrity, transparency, accountability, and democratic values, while putting the people and businesses at the centre.

Tenth, there must be detailed programmes and solutions to protect the environment, and further application of science and technology to fight climate change, landslides, and rising tides, protect the water and fish resources and promote clean energy (especially solar and wind powers). — VNS

Representatives of the six development institutions (ADB, KEXIM, AFD, KfW, JICA, and WB) committed to $2.2 billion worth of funding for the regional linkage projects, as part of the implementation of the Mekong Delta Regional Master Plan. — VNA/VNS Photo Dương Giang