Market steady due to deeper divergence in large-cap stocks 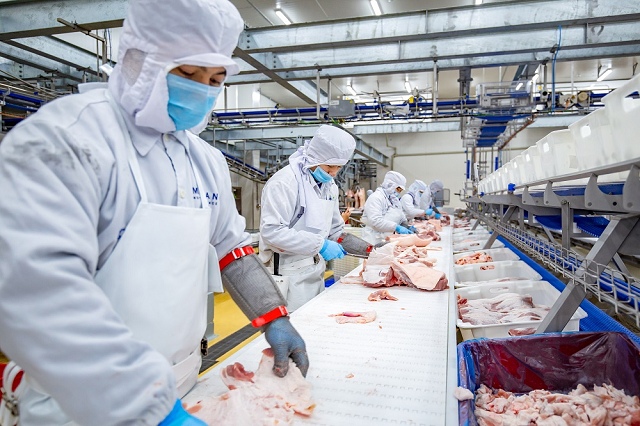 Workers processing meat on a production line at a Masan Group facility in the northern province of Hà Nam. The company shares climbed nearly 1.4 per cent yesterday, supporting the market’s rally. Photo masanmeatlife.com.vn

HÀ NỘI — Indices were little changed on Friday, as large-cap stocks faced strong divergence after surging in the previous session.

The market benchmark VN-Index on the Hồ Chí Minh Stock Exchange (HoSE) ended at 1,505.33 points, up 0.33 points or 0.02 per cent. The index fell nearly 1.1 points in morning trade, before bouncing back in the last minutes.

It surged nearly 19.5 points and broke over the psychological level of 1,500 points on Thursday.

The market’s breadth remained positive with more stocks increasing, while liquidity fell slightly compared to the previous session. Of which over 928.9 million shares were traded on the southern bourse, worth nearly VNĐ29.6 trillion (US$1.3 billion).

Fourteen of HoSE’s 30 biggest stocks in market capitalisation in the VN30 basket increased, while 14 stocks declined and two stayed flat.

Data compiled by vietstock.vn showed that the uptrend was mainly led by banking, realty and commodities stocks.

Of which VPBank (VPB) was the biggest gainer today, followed by Masan Group (MSN), BIDV (BID), Vincom Retail (VRE) and Asia Commercial Joint Stock Bank (ACB). All the stocks rose in a range of 1.17-3.21 per cent.

It also received support from other big stocks like Development Investment Construction JSC (DIG), up 3 per cent, Phát Đạt Real Estate Development JSC (PDR), up 2.84 per cent and SSI Securities Corporation (SSI), up 2.42 per cent.

However, gains were capped by losses in many other large-cap stocks as investors attempted to take profit after the market surged in the previous session.

Nearly VNĐ4 trillion worth of shares were traded on the northern market, equivalent to a trading volume of over 141.3 million shares.