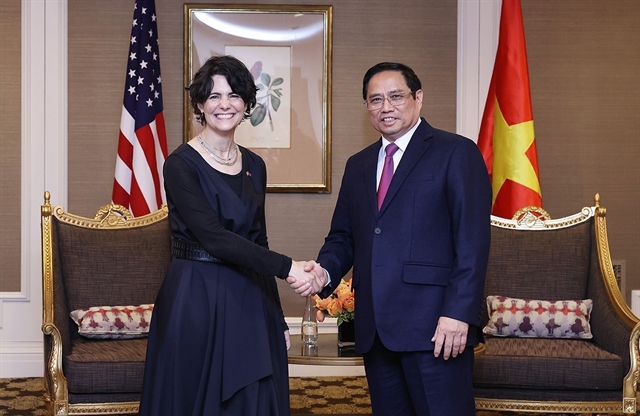 LOS ANGELES — Prime Minister Phạm Minh Chính met with Deputy Mayor of International Affairs for Los Angeles Nina Hachigian in San Francisco on May 17 afternoon (US time) as part of his working trip to the US to attend the ASEAN-US Special Summit.

Nina Hachigian said that as she used to be an Ambassador of the US to ASEAN, she is aware of the strong relationship between the US and Việt Nam.

She said that Los Angeles had promoted cooperation and exchanges with Việt Nam, citing a trade promotion delegation visiting Việt Nam in 2018 and a delegation of students in 2019.

The Deputy Mayor of Los Angeles wants to strengthen cooperation with Việt Nam this year, and the city is looking forward to setting up a twin relationship with Hà Nội and opening more direct non-stop flights to Việt Nam, she added.

He expressed his hope to increase the export of agricultural and aquatic products to the US market, including Los Angeles, affirming that Vietnamese goods can fully meet the strict standards of the US market.

He asked the Deputy Mayor to pay more attention to the investment of Vietnamese companies in her city and informed her of Vietjet’s plan to open a direct air route to Los Angeles.

The Vietnamese Government leader suggested that Hachigian encourage businesses in the US and Los Angeles to invest in Việt Nam in the entertainment and cultural industries as Los Angeles has many strengths in these fields.

He also invited the Mayor and Deputy Mayor of Los Angeles to visit Việt Nam to discuss more specific and effective cooperation mechanisms.

PM Chính said he expected the Deputy Mayor, with her experience as a former US Ambassador to ASEAN, and with the US and ASEAN committing to upgrading their relationship to a Comprehensive Partnership, would further contribute to promoting this partnership, bringing benefits, peace, cooperation, development and prosperity for the region. — VNS