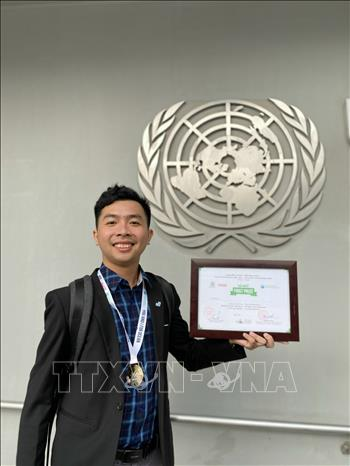 “About two years ago, I had the opportunity to participate in a community project on the environment as a consultant,” said the 31-year-old lecturer.

“From this, I was connected with a volunteer group called ‘Green Rivers’ that shared the same desire to invent solutions to the water pollution problem.”

During this period, Japan sponsored Vĩnh Long Province with two expensive trash collectors. However, the effects were minimal because they only worked well in still water environments like ponds and lakes, and the Mekong Delta region has many fast-flowing rivers.

Anh and his colleagues researched and manufactured a rubbish picker that could work well in dynamic water environments, collecting light rubbish floating on the water surface, such as plastic bags, plastic bottles, and paper.

However, the research team faced limited funding and scope for experiments due to the pandemic.

The initial cost of the project was only VNĐ5 million (US$218). Meanwhile, materials that could make the contraption work constantly in wet, outdoor conditions were not cheap.

To solve this problem, Anh’s team reused materials from industrial waste, combined with recycled materials such as water pipes and bicycle chains, which are inexpensive and guard against corrosion. 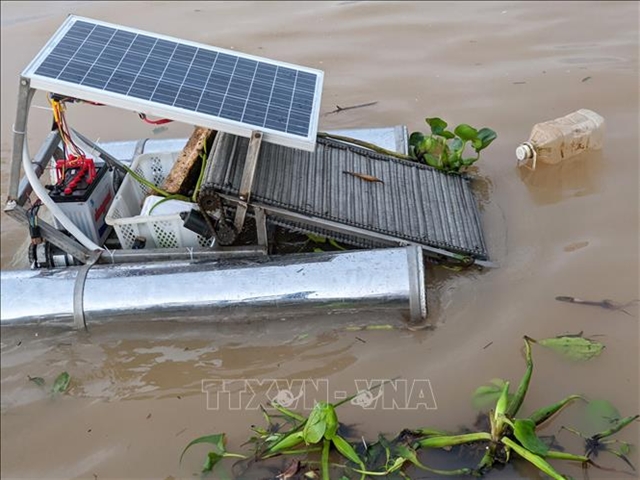 The WSCA 2.0 in operation on the Hoài River in Quảng Nam Province. — VNA/VnExpress News Photo

After overcoming the obstacles, the WSCA 2.0 trash collector was finally created. Compared to the Japanese models, it is automated, compact, simple to operate, easy to replicate and low-cost. And most importantly, the amount of plastic waste is reduced immensely in operation.

Version 1.0 of the trash collector was tested earlier in the Cái Răng River in Cần Thơ and could collect 15-20kg of plastic waste.

The second version added solar power and smartphone controls. The collected solar power means the contraption works even during nighttime.

At UNESCO’s request, the WSCA 2.0 operates in the Hoài River area in Quảng Nam, a known pollution spot near a tourist destination.

Upgrades such as cameras and AI to recognise trash are planned for Anh’s trash collector.

These upgrades are aimed at helping environmental researchers collect information on pollution, which will help raise public awareness.

“We are very proud of the success of the WSCA 2.0 project by lecturer Huỳnh Ngọc Thái Anh and his colleagues,” said Trần Nguyễn Minh Thư, Head of the Computer Science Department at Cần Thơ University. “This is the result of the practical learning model and practical application our university is following.”

Through the WSCA 2.0 garbage collector model, Anh and the research team hope to raise awareness of pollution and inspire other young Vietnamese to take action and create new solutions to problems. — VnExpress News