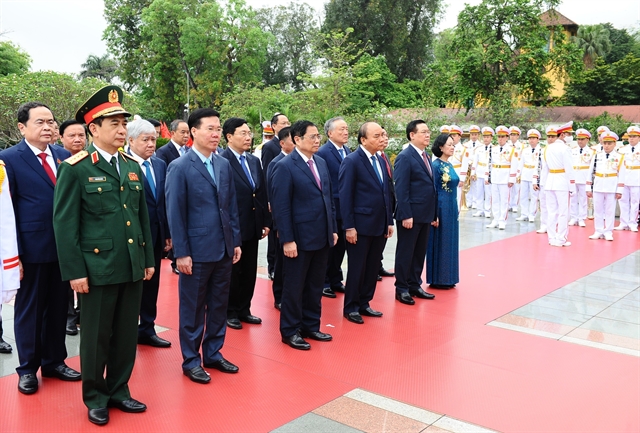 HÀ NỘI — A delegation of the Party, State, National Assembly (NA), Government and the Việt Nam Fatherland Front (VFF) leaders paid tribute to late President Hồ Chí Minh at his mausoleum and offered incense at the Martyrs’ Monument in Hà Nội on Wednesday ahead of of the 47th anniversary of the Liberation of the South and National Reunification Day (April 30).

They showed their profound gratitude for the late President, who devoted his whole life to the nation and led the Party and the people to glorious victories.

On the same day, delegations of the Ministry of National Defence, the Ministry of Public Security, the Party Committee, the People’s Council and the People’s Committee of Hà Nội also paid tribute to President Hồ Chí Minh and heroic martyrs who have laid down their lives to protect the country’s independence and freedom, and fight for the people’s happiness.

47 years ago, April 30 went down in the nation’s history as an indelible milestone. The 1975 Spring General Offensive and Uprising, especially the historic Hồ Chí Minh Campaign, liberated the South and reunified the nation after decades of devastating war.

The 47th anniversary of the liberation day occurs as the country is well controlling the COVID-19 pandemic and is on track for socio-economic activities. — VnExpress News