Late painter breaks his own record at auction 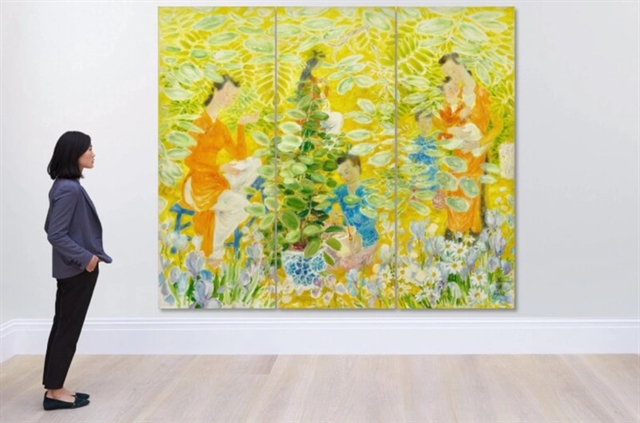 HÀ NỘI — The late Vietnamese painter Lê Phổ (1907-2001) has achieved a new record with the sale of Figures in a Garden, a three-panel painting that was originally displayed at a 1973 exhibition in Palm Beach.

The work has been sold for HK$17.9 million (US$2.3 million) at Sotheby’s Hong Kong’s modern and contemporary art evening sales, nearly six times the pre-sale estimate.

Earlier, Nude, an oil-on-canvas painting featuring a nude woman by Lê Phổ was sold for nearly $1.4 million at an auction at Christie’s Hong Kong in 2019 and became his most expensive work at that time.

Figures in a Garden, an oil-in-canvas painting measuring 75x209cm, was part of a private American collection. Lê Phổ’s signature in both Vietnamese and Chinese can be seen in the lower right of the painting.

The painting was purchased from the Wally Findlay Gallery in Palm Beach, the  US, in 1973, belonging to a private collection before being put under the hammer. Its sale marks the second-highest price ever paid for a piece of Vietnamese art.

“Figures in a Garden is the largest known composition by the celebrated artist, and the only three-panelled canvas composition to surface in the market. Grand in scale and painted with a vibrant, jovial palette, the present work features six life-sized figures basking in a blanket of yellow sunshine, ensconced within a plethora of flora and foliage in a garden. Figures in a garden dates to the artist’s prolific Findlay period, named after Wally Findlay Galleries, the gallery that represented Le Pho and Vu Cao Dam from 1963 onwards. The works from this period are characterised by vivacious tones and large oil-on-canvas compositions that appealed to the American collector base,” wrote Sotheby’s on its website.

“The artist skillfully imbues the composition with a sense of depth by including a maiden with cascading, black hair daydreaming in the distance. She appears almost suspended in mid-air, bringing a surreal quality to the work.”

A painter of women 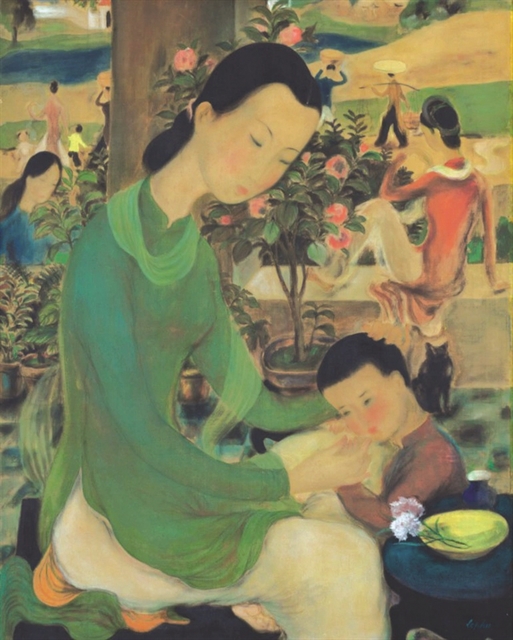 ‘The Family Life’ fetched over $1 million at Sotheby’s auction in 2017.

Born on August 2, 1907, in Hà Nội, Lê Phổ was a prominent Vietnamese painter who developed a successful and prolific career in France, with thousands of artworks to his credit. His works are keenly hunted by art collectors all over the world.

The images of Vietnamese women in áo dài (Vietnamese traditional dress) were the painter’s endless inspiration and frequently featured in his works, which also demonstrate his nostalgia for his homeland during his years living abroad

In France where Lê Phổ lived and worked, he soon became popular in the early 1930s when his first works were exhibited and warmly received by the French art critics and enthusiasts.

In his paintings, the artist always portrayed the most beautiful, elegant, sincere and purest images of Vietnamese women, thereby expressing his love and admiration as well as his thoughts and feelings.

The images of Vietnamese women depicted in the early stages of his paintings (1934-45) were often fragile, elegant, and gentle. In the next period, since the 1950s, his oil paintings still put women at the centre but integrated more liberal features.

At auctions of paintings by two of the world’s most prestigious auction houses, Christie’s and Sotheby’s, works by Lê Phổ have received great attention from collectors and constantly set price records.

He is the first Vietnamese artist to have paintings sold for $1 million and beyond at public auctions. Some of his typical artworks include The Family Life which fetched over $1 million, Nude which was sold at $1.4 million and A Self-Portrait In The Forest for $1.052 million. — – VnExpress News