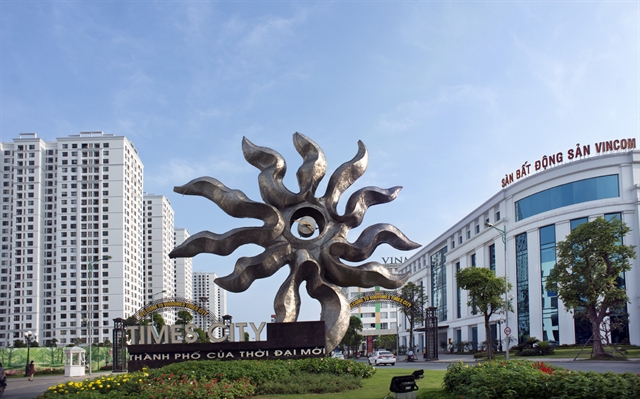 The entrance of Times City urban complex invested by Vingroup in Hà Nội. Vingroup shares led the market’s rally trend yesterday with a gain of nearly 2.9 per cent. Photo vinhomesgardeniacity.com

HÀ NỘI — The market settled higher on Tuesday, backed by large-cap stocks, with the VN-Index getting closer to the key level of 1,500 points.

The market’s breadth was positive with 247 stocks increasing, while 204 stocks declined. Liquidity was also higher than the previous trade, of which more than 842.4 million shares were traded, worth VNĐ26.3 trillion (US$1.15 billion).

The market benchmark’s recovery was boosted by strong gains of pillar stocks, as the market’s risk appetite improved. The VN30 basket recorded a rise of 2.94 points, or 0.19 per cent, to 1,520.12 points.

Accordingly Vingroup (VIC) led the bullish trend with a gain of 2.86 per cent. It was followed by Vietnam Rubber Group (GVR), Development Investment Construction JSC (DIG) and Viecombank (VCB).

The index was also supported by rises of other big stocks like SeaBank (SSB), Vinhomes (VHM) and BIDV (BID).

However steel stocks pared gains in the afternoon trade after hitting ceiling prices the previous session, with Hoà Phát Group (HPG) down 0.64 per cent, while Nam Kim Group (NKG) and Hoa Sen Group (HSG) both jumped more than 1 per cent.

However selling force was lingering due to impact from global geopolitical tensions.

Analysts from Saigon-Hanoi Securities SJC (SHS) said that the market continues to focus on the results of Russia-Ukraine talks.

In a positive scenario, if talks go smoothly, the benchmark is likely to break out of the current price range to regain the psychological threshold of 1,500 points.

On the other hand, in the negative scenario, if talks fail and tensions escalate, the VN-Index may need to retreat to lower support zones to find bottom-fishing demand, the securities added.

Investors poured nearly VNĐ3.6 trillion into the market during the session, equivalent to a trading volume of nearly 121.2 million shares.