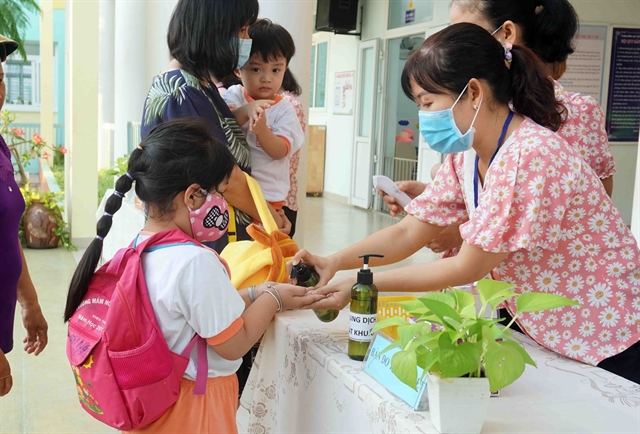 Kindergarten students can return to school on February 14, the HCM City administration has decided. VNA/VnExpress News Photo by Thu Hoài

HCM CITY – The HCM City People’s Committee has decided that students in kindergarten and from first to sixth grades can return to school from February 14.

But schools need to get the consent of students’ parents and caregivers.

Those who do not attend school can continue to study online.

Schools must prepare carefully for the reopening, offer training in pandemic safety to their teachers and other staff and hold discussions with parents about safety measures by February 13.

Local pandemic prevention and control steering committees are responsible for monitoring the implementation of safety measures by schools.

Nguyễn Minh Tuấn, owner of Ngôi Làng Vui Vẻ Kindergarten in Bình Thạnh District, was quoted by Người Lao Động (Labourer) newspaper as saying his school did a survey and found 70 per cent of parents agreeing to send their children to school.

The rest want to send their children in March after assessing the situation post-Tết, according to Tuấn.

Tuấn said 20 per cent of his staff returned to their hometowns and found stable jobs, and so his school had to hire replacements before reopening.

It had suggested that district authorities should encourage retired teachers to return to work and helped pre-school teachers who lost their jobs to move to private preschools that were looking to hire.

According to data from the department, some 12,000 teachers and officials lost their jobs due to the pandemic, including 10,000 at the preschool level.

More than 150 private preschools have shut down or are in the process of doing so.  — VnExpress News