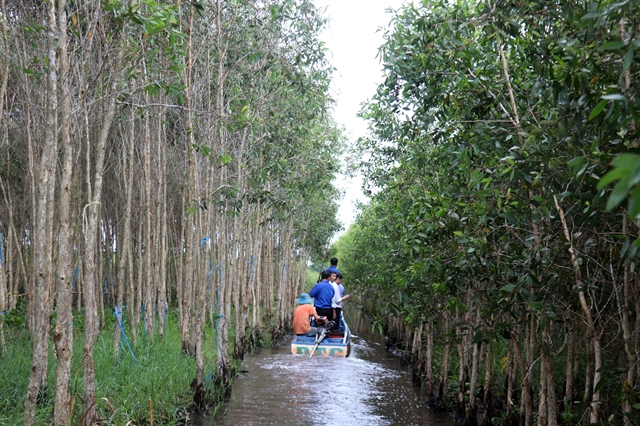 The model of growing cajuput in combination with breeding bees for honey and fish and snails offers them a good income.

The trees are one to three years old and house 120 bee hives.

He used to grow rice but the acid sulfate soil in his land affected growth.

Now he harvests up to five hectares of cajuput a year, he said.

The wood is used for construction, making paper and furniture.

He is expanding the area under cajuput and making his forest tidy to attract tourists, Minh said.

Local farmers love the model since it not only offers a steady income of VNĐ150 – 200 million (US$6,500 – 8,700) per hectare annually, but also cleans the acid sulphate from the soil and improves fallow lands.

According to Nguyễn Thanh Tùng, chairman of the Thạnh Lộc Commune Farmers Association, the association plans to create more effective models and has asked the Việt Nam Bank for Social Policy to provide loans on easy terms to households who practise cajuput – honey bee – fish farming, he said.

Thạnh Lộc has 674ha under cajuput and 204ha with beehives, which produce more than 7,000 litres of honey a year.

Many farmers with cajuput are also tidying up their forests to make them tourist-friendly.

An agrarian district, Giồng Riềng’s popular tourism destinations include fruit orchards, the Thạnh Hoà Temple, establishments that make traditional foods and products like rice paper and fermented fish, and cajuput forests, according to its People’s Committee.

However, its tourism infrastructure is still limited.