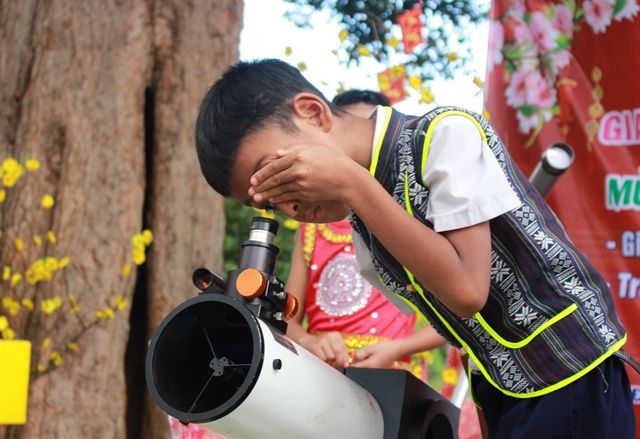 Phạm Vũ Thanh An, a teacher of Võ Văn Ký Secondary School in Nha Trang City, said the STEM education methods were being implemented by many schools in the country to help students think more critically.

Instead of teaching the four subjects separately and discretely, STEM combined them into a cohesive learning model based on real-world applications, An said.

This schoolyear’s main theme was reading comprehension, an important tool for scientific discovery, An said.

To help expand the education methods in the province, the schools were supported by a social group – the Nha Trang Steam – to develop education programmes as well as create playgrounds for students, especially ethnic ones, across Khánh Hoà Province.

The group works voluntarily to bring science experience programmes to students to help them apply science learned in class to solve specific situations.

Recently, the group organised a programme to guide students to prepare hand sanitisers at schools in Nha Trang City.

Minh Châu, a student of Võ Văn Ký School, who participated in the programme, said: “At first when I did not approach the STEM method, I was very surprised with the preparation process and worried that negligence while working would have many consequences and dangers. Later, under the guidance of teachers, I was confident and could help other students.”

The groups coordinated with the Nha Trang Astronomical Observatory and approached students in Khánh Nam Primary School in the mountainous district of Khánh Vĩnh through an astronomy learning programme.

This was the first time the students in the mountainous area had a chance to see astronomical equipment.

Many students at Khánh Nam School were curious to see telescopes.

Cao Thị Thu Nhi, a Raglai ethnic student, said: “This was the first time I had seen, touched and looked at the sky through a telescope.”

“I studied natural science subject but in the textbook, there were no photos of technological equipment,” Nhi said.

Tạ Văn Trinh, the school’s principal, said that the school is in a mountainous area and was unable to organise learning tours for students because of financial issues.

The programme brought the students a chance to discover science and gave them the excitement and desire to discover more about the sky and the universe, Trinh said.

“I thought the programme was very meaningful and helped the students understand that the world around them was very mysterious and needed to be further explored,” he said.

“The programme also motivates students, especially ethnic ones, to learn more and discover more in their studies and spread their knowledge to others.”

Dr Nguyễn Thị Thảo, director of the Nha Trang Astronomical Observatory, said that because of the pandemic, the observatory closed for visitors so we thought about bringing astronomical instruments to school students, especially those in mountainous areas who had fewer chances to access scientific tools.

“The message we brought to the children was very simple, allowing them to see distant objects,” Thảo said. “We planned to bring telescopes to schools for children to experience for themselves and organise periodical free tours to the observatory.”  — VnExpress News