IT giant FPT posts 27.4 per cent growth in pre-tax profit in Q1 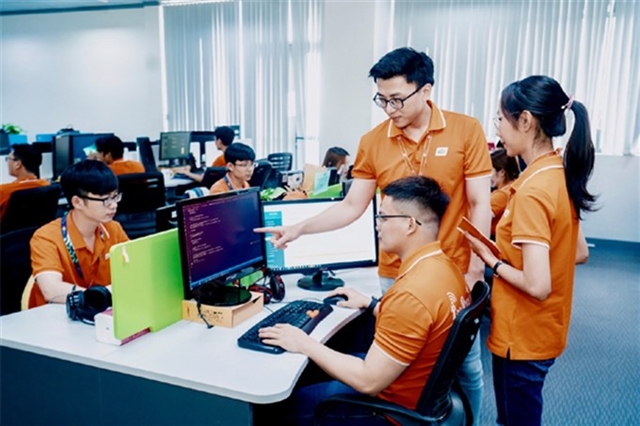 FPT’s software developers at an office in Hà Nội. In the first three months, the group reported a VNĐ9.73 trillion (US$423 million)  in revenue and VNĐ1.77 trillion in pre-tax profit. — Photo coutersy of FPT

In the first three months, the group reported a VNĐ9.73 trillion (US$423 million) in revenue and VNĐ1.77 trillion in pre-tax profit, up 28.3 per cent in revenue and 27.4 per cent, respectively, from the same period last year.

The group’s core and high-performing technology segment continued to be the main driver of the group’s growth as its revenue reached VNĐ5.59 trillion with a pre-tax profit of VNĐ770 billion.

It was followed by digital transformation services, with 96.2 per cent focusing on new technologies such as Cloud, AI and data analysis.

Notably, revenue from abroad posted VNĐ4.11 trillion bringing a pre-tax profit of VNĐ667 with an increase of 29.7 per cent and 34.9 per cent, respectively.

During the period, its revenue from ICT reached VNĐ1.48 trillion with a pre-tax profit of VNĐ103 billion. Of this figure, the ecosystem made by FPT digital transformation platforms includes more than 100 platforms, solutions, products and services based on core technology such as AI, Blockchain, Cloud, IoT and Low code that can be widely applied in e-government, transport, healthcare, banking, real estate, education and production.

Its telecom division achieved Q1 revenue of VNĐ3.47 trillion, an increase of 18.7 per cent, bringing a pre-tax profit of VNĐ701 billion.

The group’s shareholder meeting took place on April 7. It decided to pay a cash dividend for 2022 at a rate of 40 per cent. Of the figure, 20 per cent will be paid in cash and 20 per cent in shares. — VnExpress News