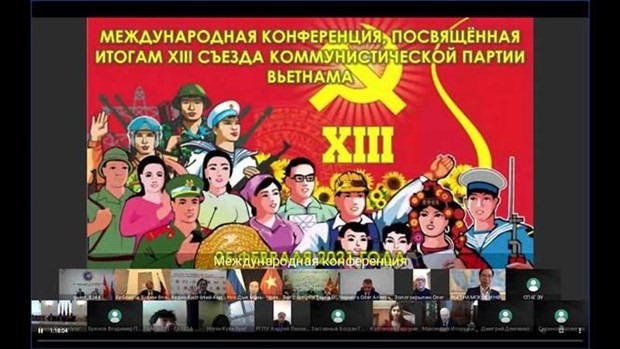 MOSCOW — The Centre for Vietnam and ASEAN Studies under the Russian Academy of Sciences’ Institute of Far Eastern Studies has published a book on the Communist Party of Việt Nam (CPV) on the occasion of the 92nd founding anniversary of the Party (February 3, 1930).

The book features 17 articles presented at the international roundtable workshop on the CPV and the 13th National Congress of the CPV, which took place on May 19-20, 2021.

Written by prestigious researchers of Russia and other countries, these articles highlight the development of the CPV and its role in the modern era as well as the significance of the 13th National Party Congress.

With three chapters, the book also focuses on Việt Nam’s tasks of internal and external affairs, and the country’s socio-economic achievements under the Party leadership.

Among the articles is the one by Professor Vladimir Kolotov, head of the Hồ Chí Minh Institute at St. Petersburg University in Russia, who analysed Việt Nam’s development strategy as mentioned in documents of the Party Congress, along with major features of the country’s political system.

He emphasised the political stability in Việt Nam amid global and regional uncertainties.

According to the researcher, the CPV has taken into consideration changes in and outside the country to set out reasonable development tactics and strategies to fulfill set targets in periods of time.

Other researchers also pointed out outstanding achievements Việt Nam has recorded in external relations under the Party leadership, saying Việt Nam’s diplomatic strategy has helped the country surpass obstacles and raise its prestige in the international arena.

The book provides readers with sound and comprehensive insight into Việt Nam and optimism about the country’s development path in the new period. — VnExpress News