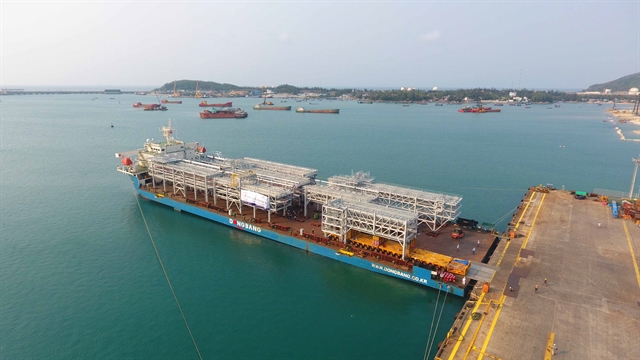 A cargo ship leaves Dung Quất Port in Quảng Ngãi Province for Malaysia. The shipment of industrial equipment will be used to install an oil and gas pipeline system at the methanol plant of the Sarawak Petrochemical Refinery. — Photo courtesy of Doosan Vina

QUẢNG NGÃI — The shipment of nine modules for the oil and gas pipeline system at the methanol plant of the Sarawak Petrochemical Refinery has left Korean heavy industries Doosan Việt Nam (Doosan Vina)’s port for installation at the Sarawak Refinery located in the coastal Bintulu City, Malaysia.

Doosan Vina said it’s the first cargo of the Sarawak project under the contract signed with Samsung Engineering Company last June for the fabrication and supplying of nearly 10,000 tonnes of equipment, including steel structures, pipes and racks of the power system that are formed into 34 modules for the methanol plant of the Sarawak Petrochemical Refinery complex.

The Quảng Ngãi-based heavy industries producer said the Sarawak methanol project was the third order from Samsung Engineering company since both sides signed a cooperation agreement in 2018.

Kim Soon Tae, leader of the project management team of Doosan Vina, said: “Because of their huge size and weight, the erection and alignment of the modules caused many difficulties for us when we had to ensure the size and operating conditions were the same as the reality at the construction site.”

“The assembly process has taken place under close expert supervision. Currently, we are focusing on the erection of nine modules for the second shipment, which is expected to be made at the end of April of 2022.”

Doosan Vina said five other equipment shipments had been planned to complete the project by November 2022.

In 2020, Doosan Vina also supplied mega industrial equipment for the Ruwais Refinery in the Emirate of Abu Dhabi. — VnExpress News