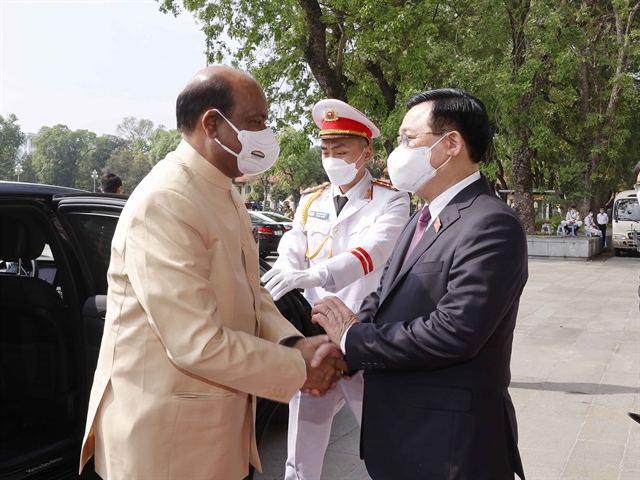 HÀ NỘI — The visit to Việt Nam by Speaker of the Indian Lower House, Om Birla, has made great contributions to strengthening the Việt Nam-India comprehensive partnership as well as the cooperation between the two parliaments, Chairman of the National Assembly (NA) Committee for External Relations Vũ Hải Hà has said.

Speaking to the media about the visit, Hà said it was a continuation of the success of the India visit by Vietnamese NA Chairman Vương Đình Huệ in 2021.

It showed the high levels of mutual trust and the close friendship and relationship between the two legislative bodies, he said, adding that it was a highlight of the activities to celebrate the 50th anniversary of bilateral diplomatic ties in 2022.

During his stay, Birla and Vietnamese Party and State leaders agreed on many issues related to the partnership between the two countries and two parliaments.

In terms of politics, the two sides agreed to increase meetings and delegation exchanges at all levels through all channels of Party, State, Government and NA as well as people-to-people exchanges. India has been one of the countries that have the highest number of delegation exchanges with Việt Nam, with nine visits by leaders of both sides within just six years.

Việt Nam and India concurred to work closely together in organising practical and diverse activities to celebrate the 50th anniversary of bilateral diplomatic ties, said Hà.

Regarding economy, trade and investment, India has become one of the 10th largest trade partners of Việt Nam with two-way trade growth increasing about 20 per cent per year, and revenue doubling over the past five years to over US$13 billion in 2021. The two sides agreed to continue to create optimal conditions for the expansion of bilateral trade relations, while encouraging businesses to invest in each other’s market.

Meanwhile, defence and security have been an important pillar of the bilateral partnership. Việt Nam and India will coordinate closely to implement bilateral action plans and cooperation agreements, while fostering collaboration in non-traditional security issues as well as criminal and terrorism prevention and combat.

Việt Nam and India also reached consensus on bolstering cultural, tourism cooperation and people-to-people exchanges as well as Yoga training, while continuing to work together in restoring cultural heritage in the central region and others of Việt Nam.

The Indian side pledged to support the implementation of existing cooperation mechanisms between India and ASEAN, said Hà.

He noted that relations between the two parliaments of Việt Nam and India have seen strong growth over the years. Right after COVID-19 was put under control, NA Chairman Vương Đình Huệ made a trip to India, which created a new important motivation for the growth of bilateral ties in the new period.

The fostering of ties between the two parliaments have made important contributions to the promotion of the bilateral comprehensive strategic partnership as well as the ensuring of peace, stability, cooperation and prosperity in the Indo-Pacific region and the world, stressed Ha.

He held that the potential remains huge for the two parliaments to further promote their ties, especially in institution building and the completion of the legal system serving post-pandemic socio-economic recovery and development.

In the future, the two sides will effectively realise their cooperation agreement reached in 2016, while strengthening cooperation among their committees and friendship parliamentarians’ groups. They will continue to coordinate closely at multilateral forums such as IPU, AIPA, ASEP, APPF, and support each other’s viewpoints on regional and international issues of shared interest.

According to Hà, the two countries will review and supervise the implementation of signed agreements between governments, ministries and sectors of both sides to make sure their efficiency.

He said that amid the changing situation in the Indo-Pacific region, Việt Nam and India are sharing visions and interests. Việt Nam highly values the role of India in the world arena, and believes that India will make more contributions to stability, peace and development in the region and the world.

The official said he believes that the fruitful outcomes of the Indian lower house leader’s visit will create new motivation for the comprehensive strategic partnership between Việt Nam and India, making it deeper, more effective and practical in the time to come. — VnExpress News