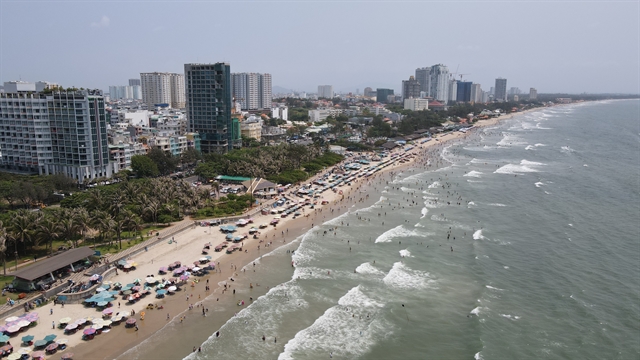 The southern coastal province of Bà Rịa-Vũng Tàu received 157,000 visitors, including more than 1,600 foreigners, and earned tourism revenues of VNĐ160 billion (US$6,980) during the three-day holiday, according to the provincial tourism department.

The occupancy could rise to 95 per cent during the National Reunification Day (April 30) and May Day (May 1) holidays, he added.

Phạm Khắc Tộ, director of the Vũng Tàu City Tourist Support Centre, said most beaches in the city were fully packed with tourists, with around 92,000 travelling to Vũng Tàu during the holiday.

Beach lifeguards were deployed at all public beaches to ensure the safety of visitors, Tộ said.

The central coastal city of Đà Nẵng welcomed 78,000 tourists, including 38,979 arriving on domestic and international flights, according to the municipal Department of Tourism.

The number of visitors was seven to eight times higher than the New Year holiday.

Room occupancy at four- to five-star hotels in the city reached 50-60 per cent during the holiday with beachside hotels having 70-90 per cent of their rooms booked.

Phú Quốc Island in the southern province of Kiên Giang saw a three-fold increase in the number of tourists over the New Year holiday, welcoming 75,000 visitors.

The ever popular Hội An Town welcomed 10,000 visitors each day during the three-day break.

The company served more than 8,000 customers during the holiday, she said

Nguyễn Minh Mẫn, marketing and communication director at TST tourist, said travel demand was predicted to be even higher for the upcoming national holidays on April 30 and May 1.

Tour bookings have already reached half of the company’s tour plans covering three regions in the country as well as islands, Mẫn said.