This year the commemoration of the Hung Kings, the nation’s mythical founders, falls on Sunday (April 10), meaning people get three days off.

The VnExpress Marathon Hue, a major sport and tourism event that has attracted nearly 4,000 runners, will be run this Sunday.

A survey by VnExpress found that mid-range and high-end hotels in the downtown are almost full and visitors are now only left with hotels or homestays in other areas.

On two major booking websites, Booking.com and Agoda, 70 percent of accommodation facilities in Hue are fully booked between April 7 and 11.

On Booking.com, three-star hotels costing VND1-3 million are booked to 94 percent of capacity.

Ngoc Han, a receptionist at Midtown Hotel Hue on Doi Cung Street, said the hotel has hired more staff but still everyone would have to work overtime to serve guests from April 7.

“This is the first time hotels in Hue are full after nearly two years.”

Hue, the seat of the Nguyen Dynasty, Vietnam’s last ruling royal family, is famous for royal tombs, ancient palaces and pagodas that attract millions of visitors every year. 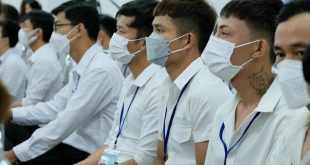