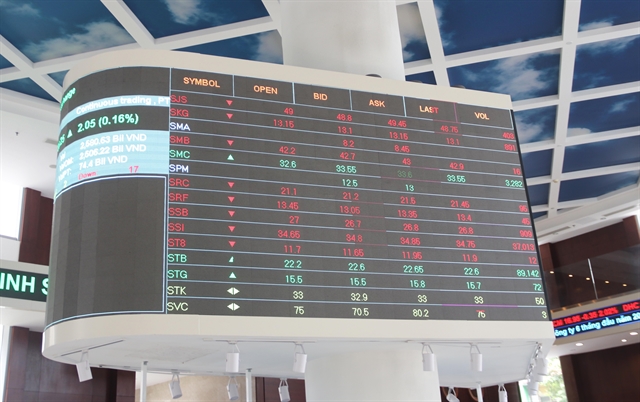 The stock trading board at the headquarters of HOSE. — VNA/VNS Photo

Stocks subject to trade under restriction on HOSE can only be traded in the afternoon session of the trading day by centralised order matching and put through trading methods.

The decision takes effect from the date of signing, which was May 25, and the amendment and supplementation of this decision was decided by the General Director of HOSE after being approved by the Chairman of HOSE.

On May 25, HOSE announced to list LCM shares of Lào Cai Mineral Exploitation & Processing JSC in restricted trading starting from May 25, due to late submission of the 2021 audited financial statements. Therefore, from May 26, LCM shares can only be traded in the afternoon session by the method of centralised order matching and put through trading.

This means all three stocks can only be traded in the afternoon session of the trading day by centralised matching and put through trading methods.

The price of FLC shares is down more than three times since Trịnh Văn Quyết, former chairman of FLC Group, was prosecuted and detained for manipulating the stock market and hiding information in securities activities at the end of March.

On May 26, the trio stocks all hit floor prices. — VNS