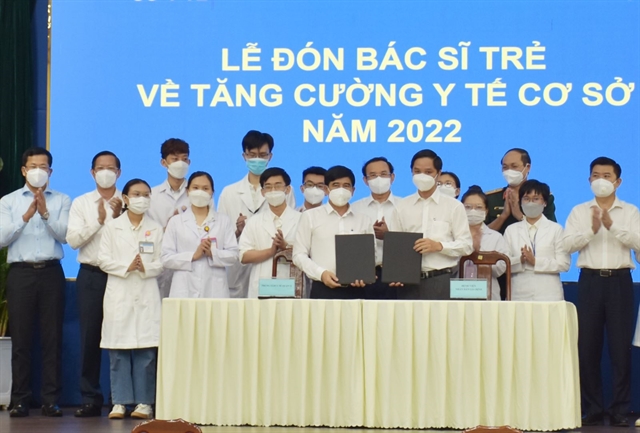 Fresh graduates from Phạm Ngọc Thạch Medical University in HCM City are being sent to grassroots medical stations to practise for a year. VNA/VnExpress News Photo

HCM CITY — Almost 300 new graduates from the Phạm Ngọc Thạch Medical University in HCM City have been sent to work at commune and ward medical stations across the city to improve the quality of grassroots healthcare.

Nguyễn Văn Nên, secretary of the city Party Committee, said the city had identified healthcare as a major pillar for economic and social recovery and development when the pandemic is brought under control.

Commune and ward medical stations played a key role in providing COVID-19 patients with convenient and timely home based medical care, he pointed out.

The deputation of young doctors to grassroots health facilities would strengthen the system and enable the city to safely adapt to the pandemic, he said.

He urged the Department of Health to quickly spell out their responsibilities and roles as well as compensation and benefits.

Tăng Chí Thượng, director of the department, said this was the first time fresh graduates from medical universities were deployed to commune and ward health stations.

After a year they would practise at hospitals for six months, he said.

During their 12 months at medical stations they would totally be paid around VNĐ60 million (US$2,600), he said.

Phạm Vĩnh Anh, who recently graduated from Phạm Ngọc Thạch, said it would be a good opportunity for doctors like him to learn practically.

After working for a mobile team for caring COVID patients at home for several months, he understands the pressures primary health workers faced from overwork during the pandemic.

On Wednesday the city recorded 620 new infections, the highest number in a month, according to a daily bulletin issued by the Ministry of Health. —VnExpress News