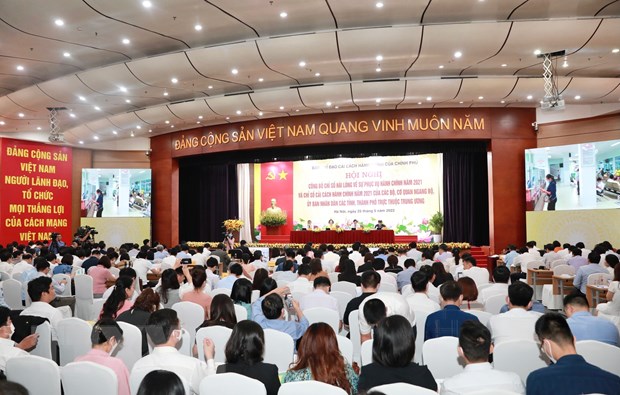 HÀ NỘI — The northern province of Hải Phòng and the Ministry of Justice topped the Public Administration Reform Index (PAR Index) of 2021, based on feedback collected from more than 79,000 people about administration reforms in 63 localities and 17 ministries in Việt Nam.

The southern province of Kiên Giang and the Ministry of Science and Technology were at the bottom of the rankings.

The results were announced on Wednesday by the Government’s Steering Committee on Public Administration Reform.

Minister of Home Affairs Phạm Thị Thanh Trà said at the launch ceremony of the report on Wednesday that 2021 was the 10th year the Ministry of Home Affairs coordinated with ministries, localities and related agencies to deploy, identify and publish the PAR Index.

2021 was the 5th year the satisfaction of people and organisations was measured across administrative agencies in all 63 provinces and cities across the country.

Sociological surveys were conducted to collect opinions and evaluations from people and organisations on the results of administrative reform in ministries, agencies and provinces, as well as to measure the satisfaction with the services that State administrative agencies offer.

Trà said that despite the impact of the COVID-19 pandemic in Việt Nam last year, the Government paid attention to boosting administrative reforms flexibly, creatively and punctually to adapt to the situation.

Phạm Minh Hùng, director of the Administrative Reform Department under the Ministry of Home Affairs and Chief of the Office of the Steering Committee, said that the sociological survey in 2021 took feedback from 79,600 respondents including 49,600 civil servants, leaders and managers at ministries and localities.

The number of surveyed people was 2.25 times higher than that in 2020 as nearly 30,000 people and enterprise representatives joined the survey. Representatives from professional associations also evaluated the administrative reform of ministries.

Seventy ministries and ministry-line agencies are classified into three groups of points. The group with results over 90 per cent includes the Ministry of Justice, the Ministry of Finance and the State Bank of Vietnam.

The group with results between 80 and 90 per cent are: Home Affairs, Foreign Affairs, Natural Resources and Environment, Labor, Invalids and Social Affairs, Construction, Information and Communication, Transport, Agriculture and Rural Development, Planning and Investment, Industry and Trade, Culture, Sports and Tourism, Health Ministry, and Education and Training.

Only one scored less than 80 per cent – the Ministry of Science and Technology, with the PAR index value of 78.72 per cent.

The results of the PAR Index 2021 of the provinces and cities are also classified into three groups.

Group B is 59 provinces and cities with index results from 80 per cent to less than 90 per cent.

Kiên Giang province was the only one falling into Group C with the result of the PAR Index reaching 79.97 per cent.

Last year was also the second consecutive year that Kiên Giang is in the group of five localities with the lowest PAR results in the country.

“In general, the results of the PAR Index 2021 of the provinces and cities continue to have positive growth, showing the efforts and determination to promote administrative reform of the local authorities at all levels. The method has brought remarkable effects, which are increasingly recognized and appreciated by the people and business community”, said Hùng. — VNS