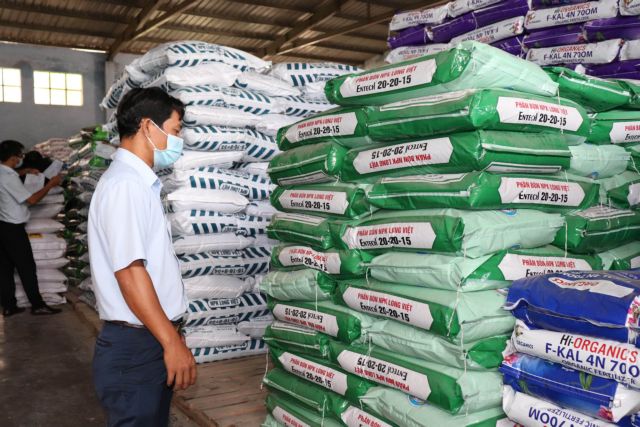 HÀ NỘI — The Ministry of Finance (MoF) has proposed a five per cent increase in the export tax rate, in an effort to cool down domestic fertiliser prices.

The move is part of MoF’s ongoing proposal to amend the export tariffs levied on fertiliser as prices in global and domestic markets have escalated recently, due to rising input prices.

The sharply-increased price of fertiliser is also attributed to the shortage of empty containers and apatite supplies, the main resource used in fertilisers production.

The proposal was compiled after the finance ministry received recommendations from agencies. The ministry reports that it has finished compiling a draft decree on export tariff, preferential import tariff, list of goods and absolute tax rates.

Currently, domestic fertiliser producers still have relied on the import of raw materials due to a lack of potassium salt mines.

Fertiliser producers have now produced most of the major fertilisers such as phosphates, urea and NPK fertilisers, while still importing SA and Potassium fertilisers. Việt Nam has so far exported fertilisers to more than 20 countries around the world.

To lower the domestic fertiliser price and stabilise the supply, the Finance Ministry has submitted to the Government to lower export taxes on fertilisers by 5 per cent, without classifying the ratio of natural resources, or minerals. Accordingly, fertiliser with a value less than 51 per cent will be subject to 5 per cent instead of zero per cent currently. Export tax for other kinds of fertilisers remain unchanged.

According to the Ministry, the proposal to raise export tax will contribute to maintaining the source of fertilisers for domestic consumption amid the high increase in prices while ensuring the harmony of interests between the Government and businesses.

In addition, it will help minimise administrative procedures for fertiliser makers and customs. They do not need to classify the ratio of mineral resources in fertiliser. However, the move will partly affect fertiliser exporters.

The MoF has also proposed to reduce the preferential import tariff (MFN) on unleaded and motor gasoline from the current 20 per cent to 12 per cent. Accordingly, the cut of MFN will contribute to diversifying petroleum supplies from other countries including China, the US and the Middle East while avoiding too much reliance on some exporters as the global crude oil prices are fluctuating. – VnExpress News