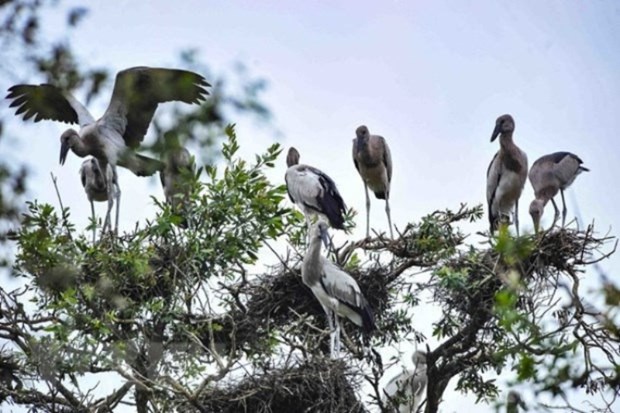 Việt Nam is home to over 900 bird species. —VNA/VNS Photo

According to Directive 4/CT-TTg, dated May 17, 2022, Việt Nam is considered one of the most important locations for migratory and endemic birds, with 63 globally important bird regions and seven endemic areas.

Currently, the country is home to more than 900 bird species, of which 99 need to be conserved, ten are categorised as critically endangered, 17 as endangered, 24 as near- endangered, and 48 as near-threatened species.

The habitats of wild and migratory birds have contributed to biodiversity conservation, tourism development, and the image of Việt Nam.

Under the directive, the Ministry of Natural Resources and Environment (MoNRE) was tasked to submit regulations on the preservation of wild and migratory wild birds in Việt Nam.

Guidelines on the management and protection, including the protection of habitats, trans-boundary migration routes, and their stopover sites, will be put in place.

The MoNRE was assigned to work with other countries and territories to protect wild animals and migratory species, and set up a system to monitor important flight paths of migratory birds.

The Ministry of Agriculture and Rural Development will work with forest rangers and local authorities to patrol, control, prevent and punish illegal hunting and capture of migratory birds.

It was urged to coordinate with relevant agencies to complete legal provisions on sanctions for illegal actions.

The Ministry of Public Security was asked to direct environmental police to strengthen measures to handle violations of legal regulations in this respect.

Conserving wild and migratory birds remains an urgent task to ensure a healthy ecosystem, contributing to migratory bird conservation in the region and the world at large, heard a workshop on Friday.

Held by the MoNRE’s Vietnam Environment Administration, the workshop looked into the implementation of the Prime Minister’s Directive No. 4/CT-TTg dated May 17, 2022 on urgent tasks and solutions to preserve wild and migratory birds in Việt Nam.

Nguyễn Hoài Bảo, from Birdlife International, said Việt Nam is considered one of the most important locations for migratory and endemic birds, with 63 globally important bird regions and seven endemic areas.

Currently, the country is home to over 900 bird species, of which 99 need to be conserved, he continued.

Despite conservation efforts, migratory bird populations have been seriously declining in Việt Nam and other Asian countries, he noted, blaming the situation to rapid development across Asia and illegal hunting and trading.