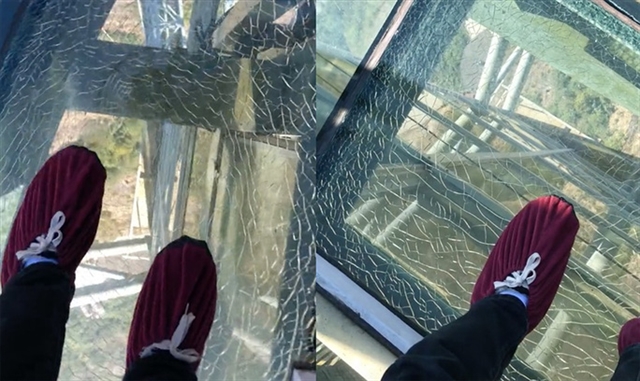 The glass piece seems to be cracked. Photo was taken from Facebook

LAI CHÂU — Glass bridges are certainly not for the faint-hearted, and if you don’t have a head for heights then maybe it’s best not to cross.

But one tourist attraction in northern Việt Nam has left visitors cracking up – after a glass panel on the bridge appears to be shattered.

Photographs published on social media clearly show the damage. But it seems the shattered pane is nothing more than a visual effect to get hearts racing even more.

Local authorities in Lai Châu Province insist the bridge is still perfectly safe to cross despite the cracks, but they still say they will soon replace the broken pane, offering peace of mind and calming the nerves of visitors.

“The piece will be replaced soon,” he said.

A representative from the local Culture, Sports and Tourism Department and Construction Department visited the site to examine the glass and said it was in good condition and perfectly safe for tourists to cross.

However, they decided that the site should replace the glass to calm the nerves of visitors.

A visitor shared a clip showing the glass piece on Facebook and TikTok.

At first, he and his wife thought the cracked glass was a visual effect to dramatise the experience, but when he looked at it carefully and found a missing piece in a corner. The couple then quickly left the site.

The visitors alerted staff who said the cracked glass was a visual effect and the glass bridge was safe.

Huân said the glass used was imported from Japan and consisted of three layers, each measuring 1.2cm in thickness, which was then bordered with bullet-proof film layers imported from the US.

“It’s our mistake not to introduce tourists to the visual effect, which has resulted in the misunderstanding,” he said.

The site was opened to the public in November 2019, which includes a lift inside a glass cage of 300m in height. The glass bridge runs 500m in length, a part of which reaches out of 60m of the attached cliff.

The bridge was built at an altitude of 2,200m above sea level and is the highest glass bridge in the country. — VnExpress News

Previous Militia members arrested for beating man to death for flouting Covid rules
Next ‘Don’t be Google’: The rise of privacy focused startups