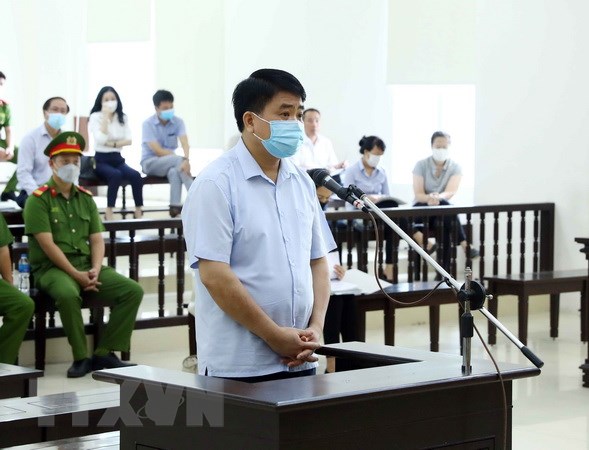 HÀ NỘI — The appeal trial has begun in Monday looking into the case of former Chairman of the Hà Nội People’s Committee Nguyễn Đức Chung and other defendants over the purchase of Redoxy-3C to treat polluted lakes in the city.

After the first-instance trial, Chung was handed an eight-year imprisonment sentence for letting his family company buy a water cleaning agent from overseas before selling it to the city.

The Hà Nội People’s Court found Chung guilty of “abuse of power or position in performance of official duties.”

The Redoxy-3C agent supplied by a German company named Watch Water Company was originally ordered on request by Hà Nội authorities but was later exclusively distributed via the Arktic company which has an authorised capital of VNĐ5 billion invested by Chung’s wife, Nguyễn Thị Trúc Chi Hoa.

At the first instance trial, prosecutors said that from 2016 to 2019, under Chung’s orders, Arktic imported more than 489,000 kg of Redoxy-3C for over VNĐ115 billion ($5 million). The company later resold the agent to the Hà Nội Sewage and Water Drainage Company for VNĐ151 billion.

The sale cost an extra VNĐ36.1 billion, the prosecutors said.

Võ Tiến Hùng, former general director of the state-owned Hà Nội Sewage and Water Drainage Company, was sentenced to four years, and Nguyễn Trường Giang, director of the Arktic Company, to four and a half years, on the same charge of “abuse of power or position in performance of official duties.”

However, at the appeal trial on Monday, Chung said that unaware his wife invested in Arktic Company. Chung maintained he was not guilty of the charges levied against him.

At the court, Chung’s lawyers asked the court to summon two former vice chairmen of the Hà Nội People’s Committee Nguyễn Thế Hùng and Nguyễn Doãn Toản as they signed documents relating to the sale of Redoxy-3C together with the representative of Watch Water Company and Deepak Chopra, General Director of Watch Water Company.

Nguyễn Trường Giang, director of the Arktic Company kept saying that he did everything that Chung and Chung’s wife asked him to despite the fact that Giang owned the Arktic company on paper.

All the company operations, including the sale of Redoxy-3C to Hà Nội Sewage and Water Drainage Company, were done on Chung’s orders, Giang said.

The trial is expected to end on Wednesday.

In December 2020, Chung was sentenced to five years in prison by the Hà Nội People’s Court for appropriating state secret documents.

In 2021, he received an additional three years in prison for the crime of abusing his position and power while illegally interfering in bidding activities for a deal on the digitisation of business registration documents in 2016 at the city’s Department of Planning and Investment.

He asked the department to allow Nhật Cường Company to pilot digitalisation of the bidding package for the personal purpose of making the company win the bid and enjoy the benefits, causing losses of over VNĐ26.5 billion (US$1.16 million) to the State budget. — VNS