Finswimming back in action after decade-long absence 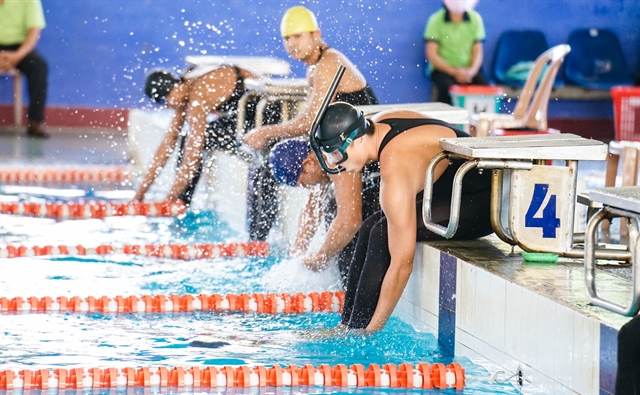 Nguyễn Thành Lộc will be of Việt Nam’s representatives at the SEA Games 31’s finswimming events which begin on May 21 in Hà Nội. — Photo courtesy of HCMC Finswimming

Việt Nam aims to win eight golds in the retuning finswimming event, but to do so they will have to prove their reputation as Asia’s best.

According to coach Hoàng Quốc Bình, Việt Nam is not only the best finswimming nation in Southeast Asia, but also in the whole of Asia.

“Currently, Việt Nam has prolific and talented finswimmers who have gained great achievements in the regional and global arena. Only some countries such as China and South Korea can challenge us for gold,” Bình said.

“In this Games, Thailand, Indonesia and the Philippines will be Việt Nam’s main opponents. They, especially Indonesia, are growing strongly in the sport with many talented athletes, whose stats are on par with Vietnamese finswimmers in some categories.

“However, my [22] athletes can completely defeat these opponents.”

Finswimming was included in SEA Games 22 in Việt Nam for the first time in 2003. At this event, Vietnamese athletes won 13 gold medals out of the 16 sets of medals.

At the SEA Games 25 in 2009 in Laos, and SEA Games 26 in 2011 in Indonesia, Vietnamese finswimmers brought home four and six gold medals, respectively, breaking many Southeast Asian records.

This year, after an 11 year break, finswimmers will take part in 13 events from May 21-22 at the Mỹ Đình Water Sports Palace.

Finswimming is a new discipline for Cambodia, who see it as an opportunity to steal a few medals.

Hem Kiry, secretary-general of the Khmer Swimming Federation (KSF), said if the federation’s six athletes grab good results, the sport might have a chance to be organised at the next Games as the Kingdom is the host country.

According to coach Hemthon Ponleu, these finswimmers will take part in 12 disciplines in this Games.

The Indonesian finswimming team has been given a target to bring home three gold medals.

Head coach Mokhamad Riyad said that one of the targeted golds is in the men’s 50m surface.

“Then the women’s 100m, and another 100m at the fins. Our targets are two surface and one below medals,” he said.

Deputy of the Indonesian CDM Team, Teuku Arlan Perkasa Lukman, believes that finswimming has the potential to grow, as it is based on swimming.

“There are many bases, we have many athletes who can do “majors” whether it be water polo or finswimming, and many more. So, if a small child takes up swimming, he doesn’t have to be a swimmer, he can become a finswimming athlete,” he said.

The Philippines will send five swimmers to the return of finswimming.

Aki Cariño, Sam Doragos, sisters Raegan and Raine Gavino, and Marjorie Manguiat, who are former full-time swimmers but made the switch to the sport during the pandemic, were chosen to represent the country.

Despite being new to the sport, national team head coach Archie Lim is confident the promising swimmers can deliver a medal for the Philippines, despite facing tough opposition from the host country.

“Based on the time of the Filipino finswimmers before, I think we can be as fast as them. Hopefully it will result in some medal,” Lim said.

In the 2011 Games, the Filipinos took home a gold in the 50m surface event and a bronze from the 4x100m bi-fins men’s relay team.

Making his fifth SEA Games appearance at the age of 40, Lim Yaoxiang is not carrying any expectations with him choosing only to enjoy the process.

He calls the sport of finswimming the Formula One of swimming. And just like an F1 car, fitness entrepreneur and trainer Lim seems to physically defy the concepts of time and age.

At his first Games in 2003, he clinched an individual bronze in the 50m surface finswimming category, and also took gold for the 4x100m relay surface event.

This year, Yaoxiang will compete in the 50m and 100m surface events. — VNS