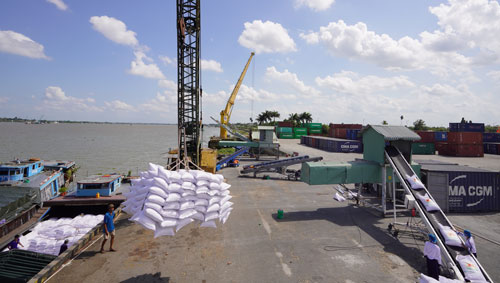 High quality rice is being prepared for export. Photo nld.com.vn

HCM CITY – Farm exports to difficult markets like Japan, South Korea, Australia, and the EU have been prolific in the first two months of this year, raising hopes for a successful year.

” It is expected that this year rice exports will be very successful thanks to many import markets around the world beginning to reopen after the Covid-19 epidemic was brought under control and trade agreements were signed.”

Lộc Trời Agriculture Products JSC, a subsidiary of Lộc Trời Group, has exported more than 4,500 tonnes of fragrant, white, brown, and glutinous rice varieties worth US$3 million to Europe, the US, the Middle East, and Asia.

His company’s exports have increased by 30 per cent in the first two months of 2022 and it has many more export orders to markets like Japan, Korea and Southeast Asia, he said.

General secretary of the Việt Nam Fruit and Vegetable Association, Đặng Phúc Nguyên, said in January exports of vegetables and fruits to key markets such as Japan, Korea, Russia, Australia, the Netherlands and the US grew by 12-69 per cent.

Vietnamese firms are familiar with the quality and other requirements in these markets, which has helped increase exports significantly, he added.

With the forecast being that in 2022 the Covid-19 epidemic will be full controlled and the global economy will recover, GC Food has invested in modern production lines to double its total capacity to 35,000 tonnes of products a year, Thứ added. – VnExpress News