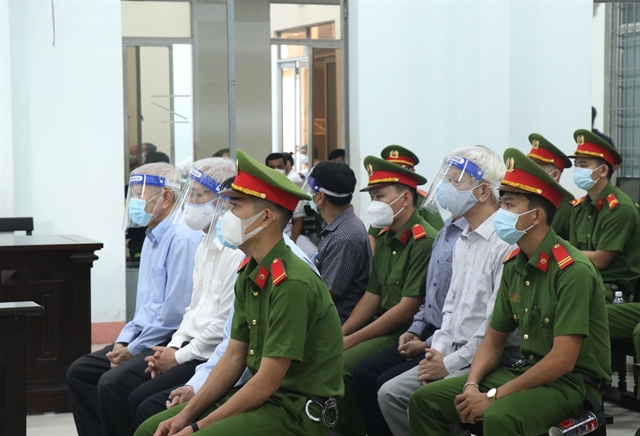 The defendants in court on Wednesday. — VNA/VnExpress News Photo

KHÁNH HOÀ — The People’s Court of south-central Khánh Hoà Province on Wednesday sentenced seven former provincial officials to between 30 and 66 months in prison for violating land management regulations after a six-day trial.

Former chairman of the provincial People’s Committee Nguyễn Chiến Thắng got the highest punishment with a sentence of five years and six months in prison.

From 2012 to 2015, the defendants, who were then leaders of the provincial People’s Committee and the departments, illegally handed over land, changed land use purposes, and granted land use right certificates in connection with the Cửu Long Sơn Tự ecological and spiritual tourism project and the Vinh Trung villa project in the province’s Nha Trang City, according to the indictment issued by the provincial People’s Procuracy.

Khánh Hoà police started an investigation into the projects on June 8, 2021 and later started legal proceedings and detained the former officials. — VnExpress News