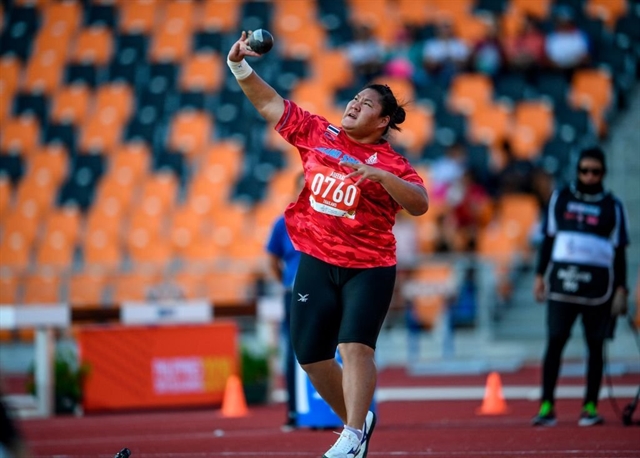 Areerat Intadis from Thailand will not have a chance to defend her women’s shot put title as the event has been canceled in the 31st SEA Games. AFP/VNA Photo

HÀ NỘI — Two more events have been canceled at the 31st SEA Games scheduled to start later this month in Việt Nam.

The women’s shot put and men’s hammer throw will not be held because of a lack of athletes as per regulations.

The decision has been announced at the Delegation Registration Meeting ongoing in Hà Nội.

Earlier, women’s beach handball was canceled for the same reason as only Việt Nam and Thailand have teams to take part.

Also in athletics, Filipino sprinter Kristina Knott will miss the Games due to a torn plantar fascia.

The Olympian announced the news at a press conference of the Philippine Athletics Track and Field Association on Monday.

The 26-year-old will not be able to defend her gold medal in the 200m event in the previous SEA Games in 2019 in her home country.

Knott smashed the SEA Games record at the New Clark City Stadium clocking a time of 23.01 seconds, and erasing the previous mark of 23.30 seconds owned by Supavadee Khawpeag registered in the 2001 Games in Kuala Lumpur.

Earlier, Vietnamese sprint queen Lê Tú Chinh also withdrew because of a knee injury. She is the reigning champion of the 100m event.

The absence of the two fastest women means that ASEAN region will definitely see new champions later this month.

Athletics will be held from May 14-19 at the Mỹ Đình Sports Complex. — – VnExpress News

Previous U.S. lawmakers in 16 states to introduce laws to protect transgender youth
Next Vietnamese increasingly buying homes in US