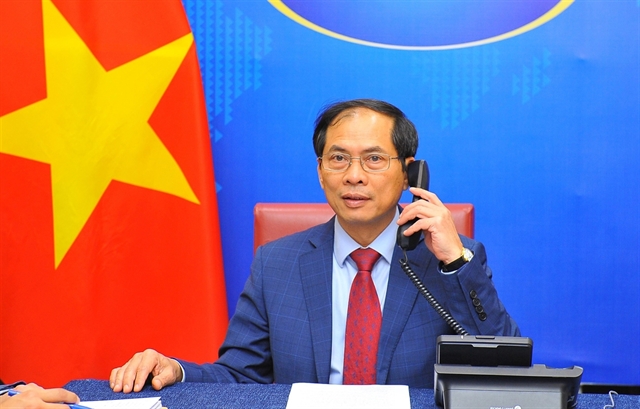 HÀ NỘI — Việt Nam attaches importance to and wants to deepen relations with the EU, Minister of Foreign Affairs Bùi Thanh Sơn affirmed during his phone call with the Vice President of the European Commission (EC) and EU High Representative for Foreign Affairs and Security Policy Josep Borrell late Tuesday.

In the talks, Borrell noted his belief that the EU-Việt Nam relations will be consolidated as the EU is rolling out a range of policies and initiatives towards the region, such as the cooperation strategy with Indo-Pacific and the Global Gateway, with Việt Nam among the prioritised cooperation partners.

They agreed to advance the bilateral cooperation on par with their potential and better meet the interests of both sides by increasing high-level delegation exchanges, effectively carrying out the existing cooperation mechanisms, closely coordinating at multilateral forums, promoting the ASEAN-EU cooperation, expanding collaboration in energy, climate change response, green transition, digital economy and infrastructure.

The Vietnamese diplomat thanked the EU and its member countries for their supply of vaccines and medical equipment to Việt Nam in the COVID-19 fight, thus helping to facilitate trade, tourism and economic recovery of both sides in the post-pandemic period.

The officials also exchanged views on regional and international issues of shared concern.

With respect to the Ukraine issue, Sơn reiterated Việt Nam’s consistent policy of supporting the settlement of disputes and differences via peaceful measures in line with the UN Charter and basic principles of international law; ensuring the security and safety of civilians, and protecting essential civilian infrastructure; and supporting and standing ready to contribute to humanitarian aid activities, diplomatic processes, dialogues and negotiations, as well as reconstruction and restoration in Ukraine.

The same day, Sơn held phone talks with Hungarian Minister of Foreign Affairs and Trade Péter Szijjártó, during which the two sides affirmed the importance they attach to the Việt Nam-Hungary comprehensive partnership.

They also highly valued progress in bilateral cooperation, with the regular exchange of delegations at all levels.

The ministers rejoiced at achievements in economic cooperation as two-way trade surpassed US$1 billion in 2021 and agreed to make use of their strength and potential to further step up collaboration.

Both sides will prepare for the 10th meeting of the Việt Nam-Hungary Joint Committee for Economic Cooperation.

Previous 5 sentenced to death in HCMC for drug trafficking
Next Zalo, YouTube, Tiktok draw most child users in Vietnam: report