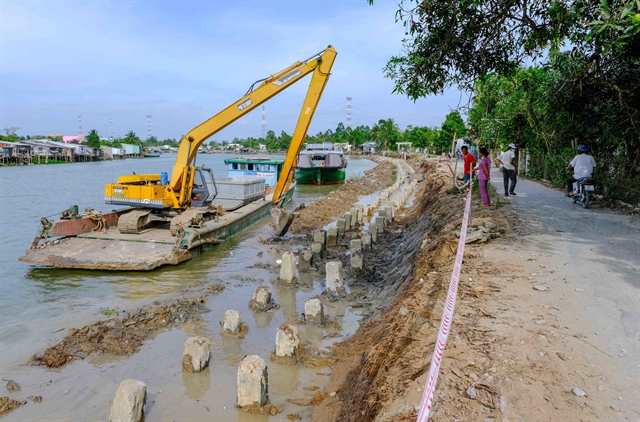 The country’s largest rice, fruit and seafood producer had 621 eroded sites with a total length of 610 kilometres along rivers and coasts by the end of last year, according to the Ministry of Agriculture and Rural Development.

Of them, 147 sites with a length of 127 kilometres have been identified as extremely dangerous, and are mostly in An Giang, Đồng Tháp and Vĩnh Long provinces and Cần Thơ City.

There are also nearly 30 whirlpools in the Tiền and Hậu rivers, tributaries of the Mekong, which threaten the stability of banks.

The changes in water flow at bends in rivers, weak banks, reducing sediment deposits in the Mekong, construction of infrastructure along banks, use of boats, and excessive mining of sand are the reasons for the riverbank erosion.

The delta has licensed companies to mine 28 million tonnes of river sand a year. But according to experts, it is difficult to monitor the volume while illegal mining is a regular occurrence.

If there are no effective prevention measures, riverbank erosion would worsen, threatening the lives and houses of thousands of people living along the Tiền and Hậu, they said.

Trần Thái Nghiêm, deputy director of the Cần Thơ Department of Agriculture and Rural Development, said the city had 23 cases of erosion last year, which affected the lives of local people and the economy.

The decline in sedimentation in the Mekong and sand mining would continue, and so erosion of banks would only worsen, he warned.

The delta needed a general zoning plan for its large river network to prevent erosion and ensure sustainable development, he said.

Nguyễn Văn Tiến, deputy head of the Việt Nam Disaster Management Authority, said erosion along rivers and coasts also had a severe impact on the delta’s environment and ecology.

The Government had allocated more than VNĐ13 trillion ($570 million) since 2016 to mitigate the erosion, he said.