Enterprises urged to make preparations to take opportunities from RCEP 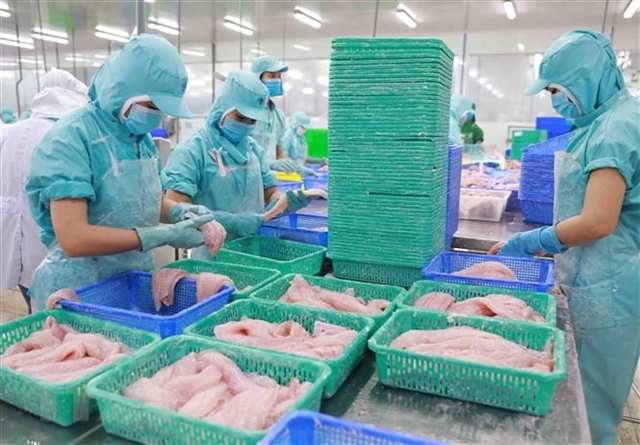 Nguyễn Anh Dương from the Central Institute for Economic Management (CIEM) spoke at a conference about the world’s largest trade deal on Tuesday, saying that enterprises needed a strategy to improve their export capacity not only in terms of price but also in quality to meet new requirements in RCEP markets.

“Most Vietnamese enterprises do not have a habit of making preparations for future policy changes,” Dương said, adding only when the regulations were in force, would enterprises find a way to meet them.

“The story is not simply producing and selling what we have but to develop business plans based on the understanding of the market, regulations and tastes,” Dương said.

Dương said the Government should also increase support for enterprises in some aspects that they are unable to do on their own.

For example, in 2012-13, Việt Nam was among the first economies to receive fruit preservation technology transfer from Japan, which paved the way for Vietnamese fruits to enter the Japanese market. It was clear that the Government-level exchange to establish trust between the two sides was important to achieve this success, he added.

RCEP was not only a trade and investment agreement but also a bridge to link Việt Nam with the regional production network and supply chain, Dương said.

RCEP opened a new chapter in the cooperation of Việt Nam with the region, which would help increase exports, and increase revenue for the economy with the reduction of tariff and non-tariff barriers to facilitate trade.

In the context that Asia was recovering quite quickly after the COVID-19 pandemic, RCEP would help Việt Nam to reduce the risk of “getting out of tune” with the economic recovery process.

Nguyễn Thị Thu Trang, Director of WTO and Integration Centre under the Việt Nam Chamber of Commerce and Industry, said that in the long-term, RCEP would establish a new supply chain in the region and Việt Nam would become an important link, which would bring large opportunities for export expansion.

In addition, when the supply chain was established, there would be less risk for the impositions of trade defence measures, she said.

RCEP, a mega trade deal among 15 Asia-Pacific countries, took effect at the beginning of this year and was paving the way for the creation of the world’s largest free trade area with a market altogether accounting for 30 per cent of the world’s population and nearly 30 per cent of global GDP.

Currently, 64 per cent of tariff lines have been removed, which would be increased to at least 90 per cent in the next 15-20 years.

The long roadmap for tariff liberation would give time for enterprises to make preparations and take opportunities arising from the trade deal, Trang said.

A recent report by the World Bank revealed that Việt Nam was forecast to enjoy the highest trade and income gains among members of RCEP.

In the most optimistic scenario, where all benefits were applied, Việt Nam had the highest gains of all RCEP member countries, newswire Vietnam Briefing cited the report as saying. Việt Nam’s income levels increased by 4.9 per cent relative to the baseline, higher than other countries, where the income level increased by 2.5 per cent.

Trade also increased the most in this scenario, with exports expanding by 11.4 per cent and imports by 9.2 per cent, relative to the baseline.

All RCEP member countries would see increases in exports and imports. Việt Nam’s exports were expected to expand by 11.4 per cent and imports by 9.2 per cent.

According to the WB’s report, RCEP also provides an opportunity to promote growth and support recovery after the COVID-19 pandemic.

The WB report said that the simplification of procedures such as customs and rules of origin would help reduce bureaucracy, allowing more small and medium enterprises (SMEs) to participate. These enterprises account for 98 per cent of the total number of enterprises in Việt Nam, contributing 40 per cent of GDP. Thus, RCEP would offer a chance for Vietnamese SMEs to enhance the value chain.

Việt Nam’s economic growth will come from a deeper and more inclusive commitment through RCEP intra-regional trade, common rules of origin and greater openness to goods and services in accessing markets, especially the Chinese market, it said. — VnExpress News