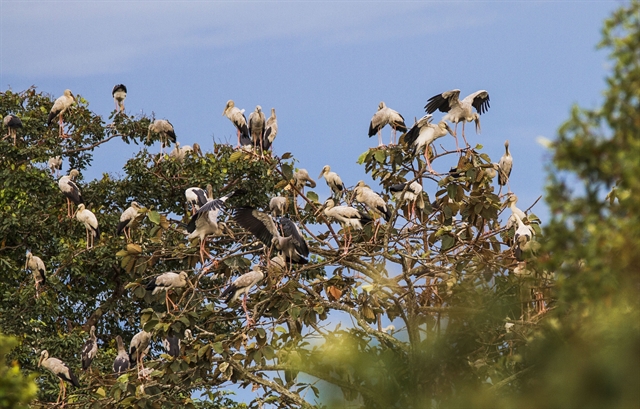 TÂY NINH — More than 1,000 Asian openbills, an endangered species in Việt Nam, are gathering at a savanna called Tà Nốt inside the Lò Gò-Xa Mát National Park in the southern province of Tây Ninh, according to the national park’s director Châu Văn Văn.

The Asian openbill, scientifically known as the anatomus oscitans, is listed in Việt Nam’s Red Data Book as an endangered species facing a high threat of extinction.

Văn said he has requested the national park’s forest protection team to increase surveillance and do everything possible to keep the birds safe.

Hồ Đắc Long, deputy head of the national park’s department for science, conservation, and international cooperation, said this is the first time in many years that the storks have returned to the national park, which is an encouraging sign showing that savannas, wetlands, and fauna in the park have been well-preserved to offer food and shelters for migrating birds.

The storks’ favourite spot remains the 100-hectare Tà Nốt savanna lying in a strictly protected area in the national park, he said.

Văn added the Asian openbills have been spotted in Lò Gò-Xa Mát since around the end of May and they normally remained here for no more than a month.

In Việt Nam, they are also known as cò ốc (snail storks) since they mainly eat snails. They also eat frogs, crabs, large insects, and other small living things. They are mostly seen in the country’s southwestern region. — VNS