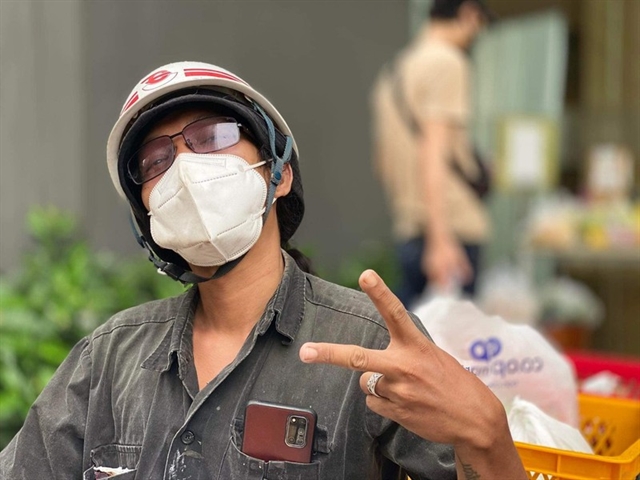 Phạm Tùng Lâm “The Drinking Straw Man”, on his way to deliver necessities to people in need. Photo baophapluat.vn

HCM CITY — During the worst days of the pandemic in HCM City, many people volunteered to help others, including 30-year-old Phạm Tùng Lâm who gives out food and money to the city’s poorest.

Lâm is currently the owner of a carpentry workshop in Thủ Đức District, but is famed for his acts of kindness and charity.

“In my youth, I loved making small handicraft pieces,” said Lâm. “I collected drinking straws that people threw away to make small insects, houses and cars.”

This led Lâm to be nicknamed “The Drinking Straw Man,” and it has stuck ever since. He loves the name because it reminds him of his origins, youth and the hardships that he had to overcome.

Born in a poor working-class family, Lâm’s life was tough from the beginning. When he was 11, his father passed away and his mother became the main breadwinner of the family.

Lâm was often under the care of his grandparents since his mother had to work double shifts. But she soon remarried, and Lâm was blessed with the love of his stepfather.

As the family was poor, he could not go to school like other children. His mother send him on a literacy program, and he was ridiculed by the neighbours.

“That boy will never have a future” are the cruel words he often heard that motivated him to have a better life.

The once-illiterate boy grew up and became a student in Văn Lang University’s Industrial Design faculty. In his second year there, Lâm travelled back and forth across Việt Nam on his bicycle.

“It was to fulfil my late father’s wishes of travelling the nation,” said Lâm. “When I completed the journey, I was so happy because I did it on my own two feet.”

“It was on Christmas Eve some years ago when I met an old woman selling lottery tickets,” said Lâm, recalling how his charity work started. “I and my friend declined, but I saw that the woman was looking at the loaves of bread that I had bought.”

Lâm gave the bread to the old woman, and with the help of his friends, bought all the bread in the nearby bakery to give to homeless people and those working on Christmas Eve. The group have been continuing this activity for 10 years.

When HCMC was fighting the pandemic, Lâm left his house on his trusty Cub motorbike with a big basket full of essentials. Loaves of bread, milk, and facemasks were handed out by Lâm to the many poor people struggling throughout the city.

He would also sneak in some money, around VNĐ500,000 to VNĐ1 million (US$22-44). Although people were hesitant at first, Lâm calmed them: “Don’t worry, I have lots of it running around. Keep it safe for a rainy day.”

“I have no intention of being famous,” said Lâm. “Charity and volunteering for me are ways to ‘repay’ HCM City for helping my family at the worst of times.”

He recalls a story of when his 93-year-old grandfather went missing for five days and was helped by strangers in the city, which he was thankful for.

Lâm has a charity fund, though the details of his account are undisclosed. “I don’t want to pressure other people to do charity,” he said. “The funds come from my friends and my own money.” — VnExpress News