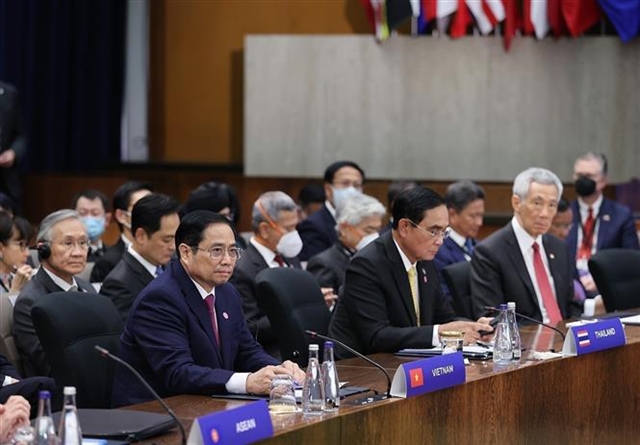 HÀ NỘI — The recently concluded ASEAN-US Special Summit, taking place after a five-year hiatus and marking the 45th anniversary of the sides’ dialogue relations, has demonstrated the US’ determination and strong efforts and is vivid proof of their appreciation of such ties as well as commitment to and wish to promote it.

That was the message from Vietnamese Deputy Minister of Foreign Affairs Hà Kim Ngọc who also emphasised that this is the first time that exchanges and meetings had taken place between leaders of ASEAN countries and leaders of US Congress, Vice Presidents, senior officials in the Joe Biden Administration and major corporations.

He said it showed that the US attached great importance to, strongly committed to, and supported the development of its relations with the bloc.

The official said the two sides affirmed to value each other’s positions and roles, and exchanged views on regional and global issues. They agreed to strive to ensure peace, stability, security, safety and freedom of navigation and overflight in the region, including the East Sea, to peacefully resolve disputes in accordance with international law and the 1982 United Nations Convention on the Law of the Sea (UNCLOS), and to promote a favourable environment for the early negotiations on a Code of Conduct (COC) in the East Sea that is substantive, effective, and consistent with international law, including UNCLOS.

On the Vietnamese delegation’s participation at and contributions to the summit, Ngọc said PM Chính took part in and addressed all the activities within its framework, sharing viewpoints on the development orientations of the ASEAN-US relations as well as the international and regional situations.

On the orientations, the PM stressed ensuring peace and maintaining stability must be taken as a frontline issue. The countries should cooperate and share responsibilities, control the differences, respect the law, thus helping realise a world of peace, stability and prosperous development. ASEAN, the US and other partners should strive to cooperate in maintaining peace, stability, security, safety and freedom of navigation and overflight in the East Sea, in the spirit of respect to international law, restraint from the use of force and unilateral acts that further complicate the situation and erode the trust among the nations.

Secondly, priority should be given to the restoration of the trade and investment flow. Việt Nam would provide the best support to US investors and enterprises in expanding their businesses in Việt Nam and connecting with the ASEAN market; and asked the US to support ASEAN in its green and sustainable development; and expected the US to push up the cooperation in the framework of the Mekong-US partnership.

Thirdly, there should be a global approach in dealing with the global issues.

The PM had contact with President Joe Biden, meetings with US administration and congress officials, representatives of major firms and groups, scholars, and the Vietnamese community in the US. He also had meetings with many leaders of other ASEAN countries. — – VnExpress News