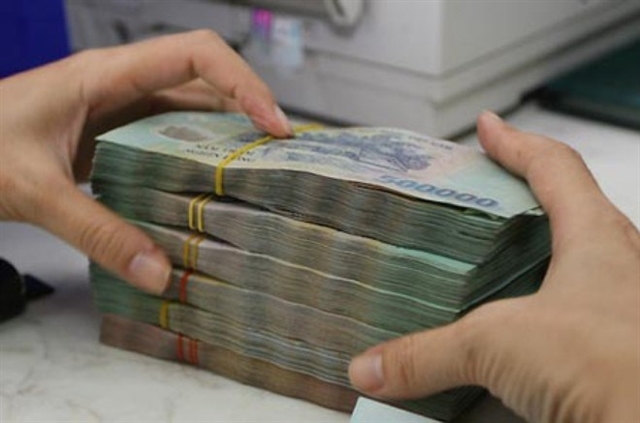 A bank teller counts cash at an office in Hà Nội. Deposit interest rates are under increasing pressure in the wake of rising inflation and stronger-than-expected credit growth. Photo diendandoanhnghiep.vn

HÀ NỘI — Deposit interest rate in the second half of this year might be adjusted up some 0.3 to 0.5 percentage points, experts forecast.

Banking expert Nguyễn Trí Hiếu told Việt Nam News that savings interest rates in the remaining months of the year will unlikely remain at historic low levels as last year due to a higher capital demand and inflationary pressure as well as a fiercer competition from other investment channels such as real estate and securities to attract idle capital flows.

The đồng interest rates traded between banks on the interbank market by the end of April declined by 0.5-0.7 percentage points per year, but increased again in early May 2022. Specifically, the interbank interest rates in early May 2022 were 0.1-0.4 percentage points per year higher than the rates at the end of April on short terms of less than one month.

Not only small-sized banks, but large-sized banks, which previously always kept deposit interest rates at very low levels, have recently also adjusted up their rates as a move to increase the competition in attracting depositors.

Techcombank, for example, last week increased savings rate by 0.3-0.45 percentage points per year, lifting the highest rate at the bank to 6.5 per cent per year. The surge was the bank’s strongest interest rate adjustment in more than six months. In previous adjustments, Techcombank’s rate usually only increased slightly by about 0.1-0.2 percentage points.

Data of the State Bank of Vietnam (SBV) showed total credit supply as of May 20 reached more than VNĐ11 quadrillion, up 7.66 per cent compared to that at the end of 2021 and doubling the figure recorded over the same period last year.

SBV’s deputy governor Đào Minh Tú said from the beginning of this year, SBV had guided credit flow towards the production and business sectors as well as prioritised areas, while tightly controlling credit in risky areas.

Particularly, a growth of over 8 per cent was seen in credit for sectors facing difficulties such as tourism and hotels, while a 7.6 per cent increase was recorded in industrial sectors and supporting industries.

The SBV Deputy Governor said as of the end of April, more than VNĐ695 trillion in loans had been given to more than 1.1 million customers.

Thanks to the strong credit growth, many banks have almost reached the credit quota they were granted at the beginning of the year.

Research by SSI showed an unprecedentedly high credit growth rate was recorded in State-owned banks (up 6.4 per cent since the beginning of the year), which is a positive sign of economic recovery.

Therefore, banks could be granted more credit room to facilitate loan expansion. Meanwhile, banks involved in the restructuring of weak credit institutions such as Vietcombank and MB could have the opportunity to grow at a very high level. — VNS