Defence Minister meets with Singaporean, US, Canadian counterparts on sidelines of Shangri-La Dialogue 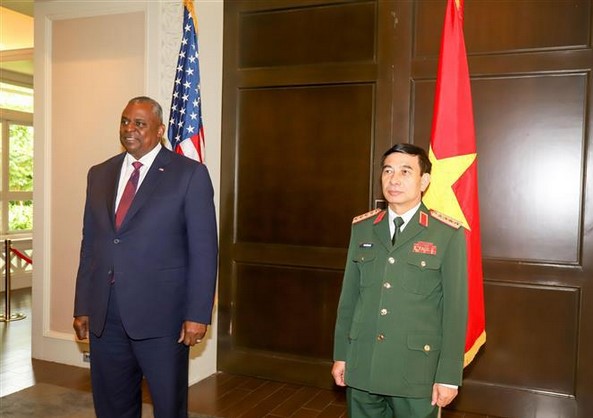 SINGAPORE – Defence Minister Gen. Phan Văn Giang onFriday had bilateral meetings with his counterparts from Singapore, the US and Canada on the threshold of the 19th Shangri-La Dialogue in Singapore.

During the meeting with Singaporean Defence Minister Ng Eng Hen, the Vietnamese and Singaporean officials highlighted the effective development of the  Vietnam-Singapore strategic partnership, saying that relations had developed fruitfully across all fields with increasing political trust.

On the basis of a good relationship between the two states, bilateral defence ties had also been further promoted, they said.

Meanwhile, Minister Giang and US Secretary of Defence Lloyd Austin, in their meeting, affirmed that the defence cooperation between Việt Nam and the US  had achieved positive results in a number of areas, including war aftermath settlement, delegation exchanges, maritime security, training, search and rescue and humanitarian assistance, and UN peacekeeping.

The two ministers agreed to continue promoting cooperation in accordance with the Memorandum of Understanding on Promoting Defence Cooperation signed in 2011 and the Joint Vision Statement on Defense Relations signed in 2015, prioritising overcoming war consequences, including accelerating and mobilising resources for  the dioxin remediation project at Biên Hòa Airport.

Minister Giang said that effective cooperation between the two sides would help strengthen trust and create motivation to expand cooperation to other areas.

Meeting with Canadian Defence Minister Anita Anand, the Vietnamese minister affirmed that Vietnam always attached importance to the comprehensive partnership with Canada, of which defence cooperation is a pillar.

The officers stressed that the bilateral defence relationship was being actively implemented, in line with the MoU on Bilateral Defence Cooperation signed in 2019 and the 3-year defence cooperation plan in the 2021 – 2023 period.