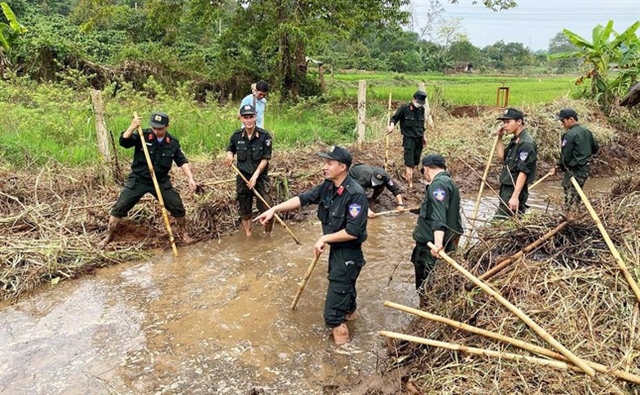 ĐẮK LẮK — Going to mountainous remote villages and supporting residents have been the regular activities of mobile police in the Central Highland province of Đắk Lắk for years.

“When it comes to the mobile police, people immediately think of a soldier with a military uniform, always present in ‘hot spots’ to fight against criminals. However, through the field trips to remote villages, we can see the warm love of the army and people,” she said.

Earlier this month, about 50 mobile police from the Mobile Police Department arrived in Cư Né Commune, Krông Búk District. They stayed at local villagers’ houses and did farming as well as other community activities with the villagers.

Under the heat of the sun in the dry season in the Central Highland region, mobile police and villagers jointly cleaned up the environment at the waterfront.

“Police officers helped us to clean the waterfront before we held a water worshipping ceremony,” she said, adding that the waterfront was not only the place to take water but also a cultural symbol of ethnic groups living in the Central Highland region.

Y Thuy Niê, 53, of Đrao Village, Cư Né Commune, said that his family was happy to receive the police.

“The police helped us clean up the environment and harvest crops. They gave us presents,” he said.

His family was among the 50 poorest households in the village who were given financial support from the mobile police department.

Y Thuy said that he and his wife were struggling to feed his family of eight, including his parents and his four children. His family has four sào (one sào equal to 497 sq.m) of coffee and they had to seek extra jobs to make ends meet.

Sergeant Y Sen Mdrang said that he become more mature, and further understood the relationship between the military and people when joining field trips.

“I had opportunities to experience many new things in life and practice good defence skills,” he said.

Sergeant Y Sen said that one of his most unforgettable trips to Yang Tao Commune in Lắk District.

Ethnic minorities account for 94 per cent of the commune’s population, Y Sen said, adding that their living conditions were very difficult as people mainly relied on farming.

“My team stayed there for a week with the people. We cleaned roads, harvested rice crops, provided physical training and sports activities, and told villagers about the laws and policies of Party, State, and Government,” he said.

Seeing local women carrying their children on their backs made Y Sen remember his mother and his childhood.

“It was a hot day. I was weeding, I saw a woman carrying a child behind her back to work in the fields, sweat rolling down her tanned face. I was moved,” the police officer said. “At that time, I told myself I would do more and more to help villagers so that they could have a better life.”

Major Phượng said that conducting field trips was a regular activity of the Mobile Police Department, aiming to strengthen the solidarity and attachment between the police and people.

Such field trips also create an environment for officers and soldiers to work on their bravery, life skills, and behaviour, demonstrating the spirit of “proactive, volunteering, serving the people” of the police force. — VnExpress News